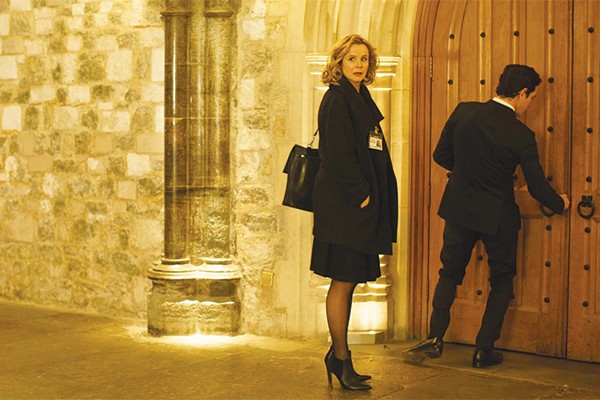 Following the likes of successful BBC mini-series like Happy Valley comes Jessica Hobbs’s Apple Tree Yard. Based on the novel of the same name, Apple Tree Yard centres on Dr Yvonne Carmichael (Emily Watson), a scientist who is unhappy in her marriage. She begins an affair with a guy called Mark Costley (Ben Chaplin), a mysterious womanizer whose true identity won’t be revealed until the end. Basically a whole lot of drama happens.

Hobbs nicely sets up a bit of mystery throughout the program. We see Yvonne in the opening of the series in a police van, so we know something’s going down. Mark Costley’s identity is also a source of mystery.

Apple Tree Yard was a fairly good watch overall, and since it’s only four one hour long episodes you don’t have to dedicate precious amounts of time to watching it. The fact that it’s British makes it better too. I don’t think I’ve seen a more British sex scene than two middle aged adults going at it in a broom closet in the House of Commons.

If you like British drama shows like Broadchurch, then you’ll probably like this. Your parents will probably rate it more though, seems like it’s aimed at an older demographic. Although it’s not a good idea to watch this show with your parents, due to the reasonable amount of graphic sex scenes. I watched one episode with mine and it was pretty awkward. The fact the characters are British and they’ve been drinking tea, or doing something British like that, beforehand makes it worse. Just don’t do it, watch it on your own.