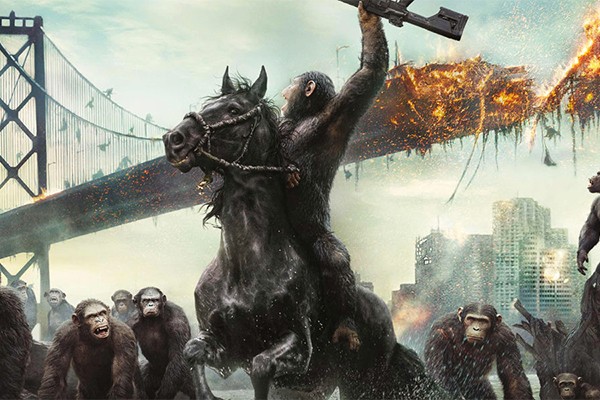 War for the Planet of the Apes

Seeing an orang-utan and a gorilla riding horseback into battle is a great sight; it’s pure CINEMA. War for the Planet of the Apes embraces these strange sights. After all, the main character in the film is a highly intelligent chimp who talks, surrounded by a troop of slightly less intelligent apes who can almost talk.

This is the third installation in the rebooted Planet of the Apes franchise, following on from ‘Rise’ and ‘Dawn’. ‘War’ is a very strong film to round out one of the better trilogies in recent times. In this film, we see the one and only, the people’s chimp, Caesar, back in action trying to protect his species, while simultaneously battling his own inner demons.

Caesar is forced into battle with the Colonel (Woody Harrelson), a ruthless leader who controls an army intent on wiping out the apes. Harrelson is one of the major highlights of the film; he plays a very complex character with some serious monkey hatred. The film lightens up slightly with the introduction of a new ape called Bad Ape (Steve Zahn); he is a true crowd pleaser who rocks a puffer sweater, allowing the film some momentary breaks from its extremely dark tone. However, the true hero is Andy Serkis; his portrayal of Caesar through motion capture technology is gripping. He gave the film a genuine sense of emotion and seriousness, allowing me to see him as the wise and sensitive primate that he truly is.

The film is a true technical achievement, improving upon the previous films’ already great motion capture technology. Director Matt Reeves also deserves a mention, as he has proven again that he is highly skilled at working with special effects driven film and creating visual spectacles. This is a film that begs to be seen on the big screen for its full effect.

Tags:   review film culture war for the planet of the apes