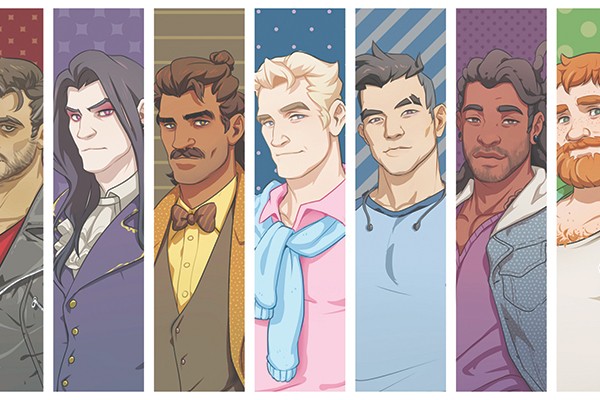 The title says it all. Dream Daddy: A Dad Dating Simulator (DDADDS) is a Dad dating simulator where you are a Dad looking to date other Dads. Yes, it’s as good as it sounds.

I’ve been looking forward to this game for quite some time because I love games that focus on building relationships. Getting attached to characters and caring about them is mostly why I play games these days. Dating simulators often get a bad reputation because they are seen as a joke. Games like Hatoful Boyfriend where you date pigeons (it’s still a good game!!!), Huniepop where you try to sleep with as many women (and probably young girls, yikes) as possible, and more recently My Horse Prince for mobile where you try and date a uh… horse boy. At face value, DDADDS can seemingly fall into this kind of ludicrous category, but it is SO much more than just a sexy dating sim.

The initial release for DDADDS had delays due to bugs and the monster known as crunch (working overtime until the product is perfect). The developers needed more time and the well-established online fan base remained patient and supportive with nothing but a stream of love. DDADDS was created by members of the YouTube channel Game Grumps, so this game already had a fan base prior to its release and the hype was already well and truly there. Their Twitter account has been consistently filled with fan art and cosplay created by fans. People care about this game and that’s because the writing and characters are so. Damn. Good.

SO, as I mentioned, you play as a Dad and get to create your own Dadsona. You can be whatever sexuality you want, but not hetero thank you! You can choose to be transgender. You can choose a huge range of body types and shapes and skin tones and hairstyles. This kind of normalised visibility is SO important in media, particularly in games, where representation is heavily straight white male dominated. There is even a Goku or “Space Warrior” hairstyle. Amazing. Get Goku to date more Dads, I say. You have a daughter named Amanda and she is so relatable and cute and funny it hurts me. Her character grows as your Dadsona grows and, depending on what sort of outcome you want, you can be a terrible Dad or a great Dad. This is not a game with a linear pathway.

ALL RIGHT TIME TO TALK ABOUT THE SEXY DADS.

So, the Dad that I immediately fell in love with was Mat. He was the first Dad that came (lol) along when I first started the game, and I was smitten. Mat owns a coffee shop, is into indie bands, uses band name puns for his coffee types and is totally sweet and REALLY HOT. Goddamn, they really nailed the character design in this game. Like, shit. All the Dads are hot. They are all great. Jeez. Just, phenomenal work. I love them all. But Mat, damn. You are. Great. Ok, anyway, so you go on dates and try to judge what responses will be received better by your future boyfriend. You can gauge what they will like by checking out their DadBook profile. You also create your own DadBook profile! There are options to choose from to try and create a personality that fits for your Dadsona, I can’t quite remember them all but one that stuck out was “what can’t you leave the house without?” and one of the options was “my sick vape”. Nice.

Mat and I smooched on the final date but, tragically, our relationship didn’t work out and we ended up just being friends. I did not feel any sense of loss or anger, we ended on good terms and it felt right. The next Dad I plan on romancing is Damien. He is transgender, goth as fuck and apparently you have a date at a cemetery. There are other pathways to take in this game though, my flatmate also played it and slept with the first Dad she met, nice. The Christian Dad, Joesph, has a wife, Mary, that clearly has some sort of weird agenda, but I don’t think I’m quite emotionally ready for this game to fuck with me yet. Just want to have a nice time dating nice Dads for now.

This game is funny, charming, superbly written and has been the top selling game on Steam since its release. 10/10, 5/5, A+, whatever rating you want, get it!