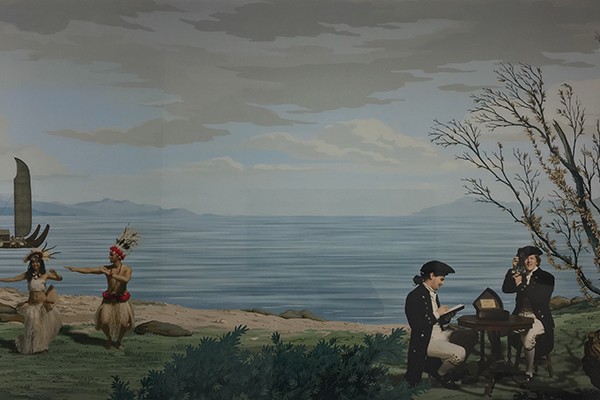 ‘Les Sauvages de la Mer Pacifique’ by Joseph Dufour is wallpaper. Spectacular, exceptionally rare, two-hundred-year-old wallpaper. Flagged as ‘armchair tourism’, the wallpaper depicts the over twenty different indigenous groups that Captain James Cook or Louis Antoine de Bougainville encountered in the Pacific. With the luscious Tahitian backdrop, the viewer is transported into a different, imaginary time. The panels depict sanitised cultural practices and stereotypes; they refuse to mirror the reality of the unfamiliar tattoos, body adornments and cultural practices encountered, and instead focus on the narrative of ‘The Garden of Eden’. It even comes complete with the Easter egg of Cook dying if you’re willing to travel to Te Papa to search for it; it’s pretty much a PC Where’s Wally.

Take this wallpaper, animate the characters, spread it across 26 meters and you have Lisa Reihana’s ‘in Pursuit of Venus [infected]’, a panoramic arrangement of the beauties and horrors witnessed and most certainly created by early colonisers. Reihana’s work picks up what Dufour’s lacks: difficult encounters and the complexities and nuances of colonisation and cultural identities. The work disrupts the romantic ideology of the time, peeling back a layer of ignorant white wash to reveal the honest story of a country.

Reihana became the name to watch when she was announced as the representative for New Zealand’s contemporary art exhibit at the 2017 Venice Arte Biennale. Her ‘Emissaries’ exhibition, an extended version of the original ‘in Pursuit of Venus [infected]’, was met with stellar reviews from the international melting pot of attendees. Interrelated sculpture and photo-based works were dispersed throughout her exhibit to create a true masterpiece on the world stage.

You can see the exhibit for yourself on our very own Dowling Street. ‘Extrait d’Image’ captures poignant still images from the ‘in Pursuit of Venus [infected]’ video footage and encases them in glass.

Finally, I have an Easter egg of my own to leave you with. If at any point you’ve indulged in an Allpress coffee over the past few months and admired the vibrant design circling the bottom rim of the takeaway cup, congrats. You too have witnessed Reihana’s ‘in Pursuit of Venus [infected]’ in all its confronting glory.

This exhibit refuses to conclude, it undergoes a constant metamorphosis from one medium to another, it infects our perspectives time and time again. Reihana’s historically correctional works raise new questions with every evolution. I suggest you head over to Milford Galleries, always free and always warm, to contemplate them for yourself.