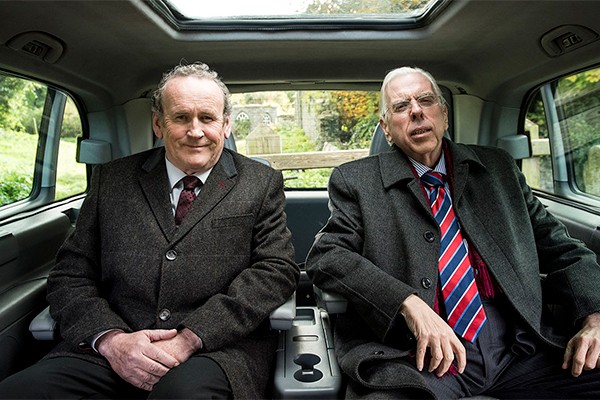 Based on true events, The Journey depicts how political rivals Martin McGuiness and Ian Paisley finally hammered out a peace accord after forty years of conflict in Northern Ireland, known as the ‘Troubles’. As the respective leaders of Northern Ireland’s Sinn Fein and Democratic Party, they had been the acceptable, public faces of the two sides involved.

In 2006, they were brought together by the British government for a summit in Scotland to try and put a stop to the Troubles. For the first time in history, the two enemies were in the same room together, albeit not talking to each other, unable to get over their poisonous past. During the summit, Paisley’s hopes of getting back to Belfast for his 50th wedding anniversary celebration appear ruined by the closure of Glasgow Airport and he’s forced to drive to Edinburgh, but, in order to avoid any chance of a terrorist attack from the other side, McGuiness has to travel with him.

In this “what if it happened this way?” scenario, Meaney and Spall both deliver astounding performances. Charming and witty, Meaney’s McGuiness is extremely entertaining as he tries to engage his stubborn and muttering counterpart. Meanwhile, Spall’s Paisley, mouth permanently set in equine grimace, tombstone-teeth to the fore, is the quintessential old foe, a man with iron clad principles that will not back down or see reason.

Obviously, the premise is fictional, the journey is not an accurate historical description, but it delivers a great and believable scenario. The script is emotional and engrossing, alternating witty and more serious moments, such as the recollection of the Bloody Sunday attacks. The camera is mostly static but not boring; the viewer remains glued to the screen due to the incredible relationship between the two main actors. Director Nick Hamm delivers a simple yet complex movie that does not disappoint.