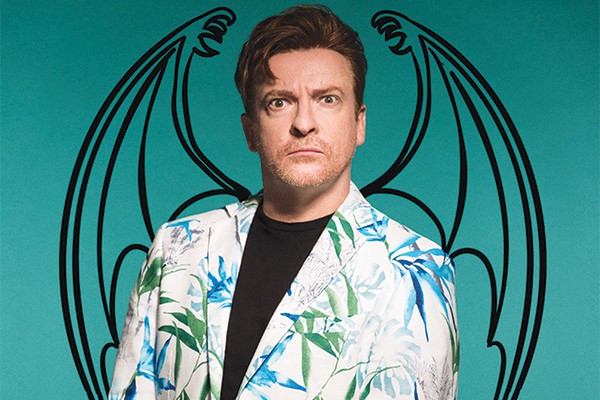 Touching on his time in the NZ Army, his belief in reincarnation, his comedy heroes and more, Rhys Darby had a chat to Critic as he returns to New Zealand and Australia for his new Mystic Time Bird tour.

Going back a few years, what was the reason you joined the NZ Army?
Well, growing up I was actually part of the Air Training Corps, a little cadet unit for kids who wanted to do something outside of school. Then I joined the Army Cadets and got really interested in the military through that. I rose to the rank of sergeant and started watching a lot of war movies in my teenage years and, for some reason, I thought this is what I should do - go and serve my country and maybe rescue some POWs from a foreign area. I dunno, I liked the adventure element of it a lot. I thought running around with guns and throwing grenades was fun.

I can definitely relate to that. But being in the army is almost the antithesis of being a comedian in many ways. Is there anything you learned or discovered in the army that planted the seed of comedy for you, or was it something completely different?
I already had comedy in my bones and in my blood. I was the class clown at school. I needed that kind of discipline because my father wasn’t around me much growing up, so I think Mum wanted to chuck me into some sort of institution that would look after me. Whilst I was in there, I really flourished in the comedy aspect of things. I got into trouble a lot because I wasn’t really the right fit, so that just made things funnier for me. Eventually I thought I’d better leave, in fact I was told by the commanding officer that I should do something else because I was kinda getting in the way.

Has Morse Code come in useful any time since leaving the army?
Not at all!

Can you still do it?
I’d have to brush up on what all the letters mean, but yeah. At one point when I was there I could do it at 40 words per minute - so pretty fast!

That’s an amazing skill to have! So you moved to the United Kingdom in 2002 for comedy. Why did you choose the UK?
Well it was the obvious place to go really. We’re in NZ, there’s nothing happening here. I thought if I wanted to make it in the world, I’ve got to go back to the mothership. So it was the UK. I was brought up with BBC comedy, and was obsessed by it. So I wanted to be part of that world. I did seven hard years in London doing comedy clubs to rise up to headlining them, and my whole view was to get on television and get into sketch comedy acting. But it was actually America that ended up taking me, thanks to the Conchords. I never thought I’d get to America, but that’s what happened. From there, the world was really my oyster. It was actually more difficult to get into the British system than it was in America, which is bizarre...

Do you think that your NZ accent helped you out quite a lot, in terms of its comedic nature?
Yeah, definitely. We were a novelty for the Americans, in fact for the world as a whole, because we’re not British, we’re not American, we pose no threat. Our voice is optimistic and naive at the same time, and I think there’s that feeling of “aww these cute guys from some made up country". But we still had to be funny, we had to have perfect timing, we had to be original, and if those things came into effect, that was the perfect recipe.

So would you say you broke through worldwide through your portrayal of Murray Hewitt in Flight of the Conchords?
Yes of course.

How noticeable was the attention before and after the release of the series?
Thanks to Myspace, word got out pretty quick. But then we never saw the rest of the season. We made it and then I returned to the UK because there was no work in New York for me as a comic, there was no acting work, I had no money. The show was only on HBO, so a few million people in America saw it, but it was a slow burner. Thankfully, HBO enabled us to be more innovative and original. If you’re on one of the big networks, they give you so many notes, and chop you down, ruining your original vision. We were very lucky to have it on HBO and be part of that awkward comedy scene that was happening with The Office and things, that people just sort of latched onto it.

I remember watching The Office and of course Flight of the Conchords, and they're just one and the same for me, just equally as fantastic as each other...
Yeah.

Do you prefer acting or comedy more?
Comedy acting, definitely. I love doing stand up, it’s what I’m doing now with this tour, obviously, but it’s really just me acting on stage, playing different characters and improvising, so both of my favourite skills. With regards to the TV acting, I’m a perfectionist, I like how you get to do many takes to get it right.

So your show turns to the world of ancient mysticism to find answers to the world's problems, and in doing so you discover that you were a bird in your past life. So that makes you the mystic time bird, is that right?
That’s right.

Ok. Can you give us a little rundown of your show?
Basically, I went off the rails last year. My mum passed away and I didn’t know what I was going to do with my life, because I felt like I was doing this comedy thing for her, and now that she was gone, I didn't really know which way to go, and so I got some advice from this mystical man - this old guy, who lives in Hawaii and he told me that I’d lived before. I believe in multiple lives. I believe that we live again because it makes sense. Because of my sound effect, my ability to mimic noises, he told me that I was previously a bird. That started to make sense to me, and then I started to realise that maybe I have always been a bird and this is the first time I’ve been a human. That’s what the show’s about - me trying to work out how to look at the positive side of life; we will live again, and the only thing we have to fear is ourselves. There’s a little message about how humans need to pull their heads in - that we’re not the only animals on the planet and that we’re kind of ruining it. That’s the message from the show.

I’m really sorry to hear about your mum, by the way.
Thank you.

What is the weirdest place you’ve ever performed a comedy show?

Probably a radar station in the Falkland Islands (off the coast of Argentina). I was working for the Combined Services Entertainment over in the UK. They sent us to various locations to sort of perform for the troupes, and one of them was the Falkland Islands. I went over there with Ed Byrne, and I remember being choppered in a big Sea King helicopter up to this mountain, where there was like ten troops who had been there for six months. That was really remote.

That must have been a treat for the people you were performing for.
Yeah they were very happy but I think they liked them more than us. Understandably.

Favourite venue to perform comedy in?
In New Zealand I like big stages. I’ve just done the Opera House in Wellington, that was really good. Grand old theatres like the one in Dunedin where I’m performing, the old Regent. It’s just about having  a lot of stage space, because I like to jump around. There's something - a sort of energy in those old theatres that kind of are easy to come to grips with and give a good vibe.

Top 5 favourite comedians:
I grew up really into Monty Python, I love Rowan Atkinson, I like Jim Carrey, Eddie Izzard, and Steve Martin. That’s kind of my list. It’s a mixture of classic sketch and physical comedy and general off the elbow weirdness. I’m not a big fan of your standard kind of stand up, because I never went and saw it, I actually found it a little boring. I’m not a Chris Rock fan or anything like that - I’m more into the performance side of things.