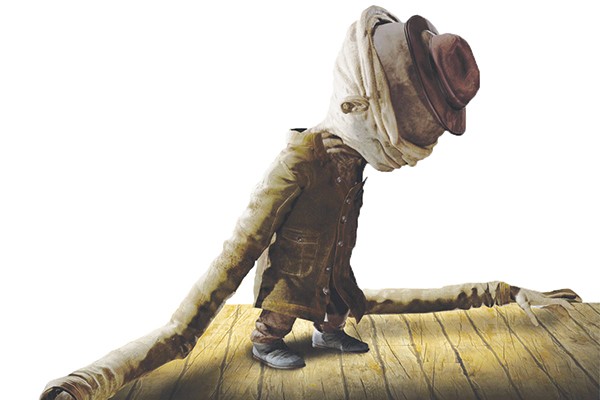 Little Nightmares: Reviewed By A Pro and a Friend of a Pro

I played this game with a group of friends and it was terrifying and fantastic fun! There was a lot of screaming and cooperation from everyone in the room, and I even needed emotional support near the end when I was too afraid to face the final spook creature (I don’t want to be too specific in case of spoilers). I’m going to review Little Nightmares as a seasoned Professional Gamer™ and my friend who has played a lot of Zoombinis and Star Wars Battlefront 2 is going to review it too. Disclaimer, I use the word spooky a lot!

If you’re one of those people who likes to know what new games are like by comparing them to other titles, Little Nightmares has been feverishly likened to Playdead’s critically acclaimed titles, “Limbo” and “Inside”. However, Little Nightmares is all about the spooking and scaring and will blatantly try and make you jump. You can control the camera and examine your surroundings in each direction, but only so slightly that you can see potential environmental clues for puzzles or the presence of the spooky creatures that you may need to sneak past or run away from. I’m not sure what to call these “enemies”. They’re humanoid, but just totally messed up. You can’t kill them, just distract and run away, but they are scary as hell and will try to kill you no matter what.

Sound in this game is perfection. You’re alerted to monsters seeing you with sound even if they aren’t in your field of vision so you know when to RUN AWAY. Sound is also a key part of solving puzzles. A lot of the climaxes in the chapters feel very cinematic and do lose their impact if you suck at video games and die a lot, like me. This was especially frustrating near the end of the game but I guess I just need to stop being so shit, right?

You can unlock achievements from jumping on beds and there are little friends called Nomes that you can pick up and hug and then they follow you around for a little bit. These little mechanics, that essentially do nothing for the immediate gameplay, do a huge amount for the impact of the story. While the story did feel rushed and a little confusing near the end, the subtleties in what you can interact with in the game did more for me than the eventual climax.

The art style and character design is fantastic. I will never forget Mr Long Arm McGee, who definitely gave me the biggest fright at one particularly scary point. I would highly recommend playing this game with a friend or a group of people for maximum spook level as well as for help with the puzzles.

Little Nightmares is a very spooky game: a review by a gaming layman.

First off, you are a tiny human with no face wearing a yellow raincoat and no shoes - impractical and very Millhouse-ian (my feet are wet but my cuffs are bone dry).

You have to navigate your way through a very poorly lit boat by solving puzzles, you know you are on a boat because the whole screen tilts from side to side. The controls that you need (on a ps4) are the circle for lighting a sneaky ciggie, the square for the sprinting, and the cross for some sick jumping. My first move was obviously to splash about in the puddles for a bit, because darn it if this child has to spend its entire existence being attacked by slugs and having NO FUN. Sometimes you have to pick up stuff - for that you are going to want to use R2 (I am looking at a controller for reference now, so I’m pretty hecking credible). Pro gaming tip, if you hold the sprinter and press L2 you can slide under things and it's preeeeetty badass. In this game you get chased a lot, and a lot of things jump out at you. I found out that my scream is particularly blood-curdling. Lisa watched a thing called a ‘walk through’ a bunch, so either she is a big ol' cheat or this game is pretty hard.

Recommend if you love problem-solving, being afraid and wondering if animated children get chilblains. 7/10 spooks from me.