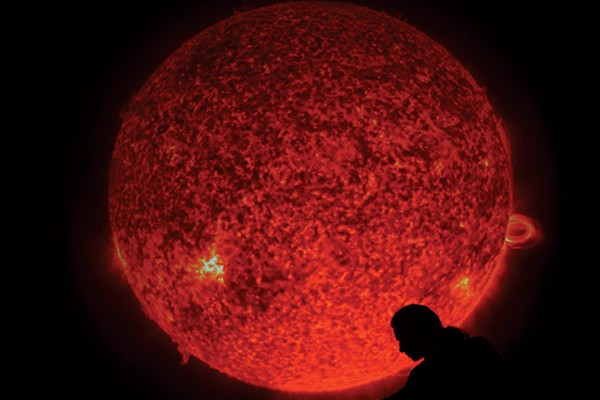 Staring at the sun as a child seemed a formidable challenge, akin to holding your breath at the bottom of a pool, only with a greater chance of permanently damaged corneas. Enter digital artist Trudy Lane. Like switching from a BSc to a BA, Lane endeavours to transport us to that sun gazing end goal with as little discomfort as possible.

Known for her blending of art, science, culture and ecology, Lane transformed the empty 23 Princes Street into a galactic viewing platform. Infrared heaters line the ceiling to present an authentic (minus 14,999,975 degrees Celsius) face-to-face encounter with te rā. The vacant store is transformed into a haven of warmth as the winter solstice arrived and the frost set in around Dunedin. A simple yet impactful project, the Sunroom aims to interlace the beauty of science and artwork, highlighting the encompassing power and majesty of the sun and its role as the origin of energy, and therefore life, on Earth.

During daylight hours, solar telescopes within the on top of Otago House provides real-time images, which on-lookers can safely stare at for as long as they wish. When the sun sets in the Southern Hemisphere, a highly detailed live stream from NASA’s Solar Dynamics Observatory (which I googled the location of, and was informed, 'Earth') is projected onto the feature wall. When the sun sets in Dunedin, the feed goes to Dresden, Germany. It periodically switches to a live stream to SDO (the solar satellite which is orbiting in the Earth's outer atmosphere) when cloud cover prevents a clear image from being displayed.

Audible pulsating and rumbling was produced by 20 years of raw data (courtesy of Birmingham University) increased in speed 100,000 times, then finely tuned to 300Hz to become discernable to the human ear. The drawling hum of the historic solar flares embraces you, almost meditative, partnering with steady warmth and low lighting to foster a peaceful womb-like atmosphere, an area in which life begins.

Several events were held in the gallery spanning the two-week duration of the exhibit’s modest existence. Highlights included the morning sun salutation yoga, discussions on quantum physics and creation narratives, and a sun-themed science show.

This was a partnership between the Dunedin Astronomical Society, Otago Polytechnic and Puaka Matariki and a showcase of an unostentatious relationship between science, artwork and community. For others it was simply warmer than two degrees, and therefore half the flats in the North East Valley.

In an interview Lane hinted at the possibility of the exhibit’s return, with additional elements to increase Dunedinites’ vitamin D intake during the winter months. However, public interest will need to take the reins and solidify the demand for an encore. Perhaps the Gregg’s coffee factory won’t feel so inclined to light the city up after dark if Lane’s solarium returns.