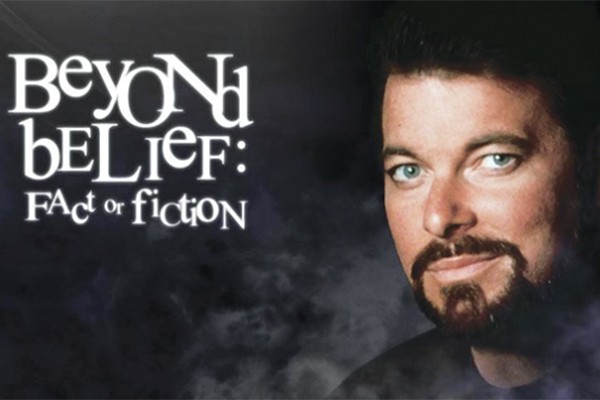 “We live in a world where the real and the unreal live side by side. Break through the web of your experience, and open your mind to things... Beyond Belief.”

You may or may not remember this spooky anthology series, which ran for four seasons from 1997 to 2002. A bit like The Twilight Zone, each episode features several stories about eerie paranormal events - but the twist here is that half of them supposedly really happened, while the other half were made up. At the end of the episode it’s revealed which ones were which, and until then viewers must endure the suspense of not knowing whether some woman really did get pregnant with an octopus, or if some guy really did see a disembodied laughing head in his oven.

This show really put the shits up me as a kid. In addition to the segments mentioned above, other images I recalled were someone seeing a dead lady standing behind her every time she looked in the mirror, and a waterlogged undead corpse angrily screaming at someone. Fortunately the show is way less scary than I remembered - in fact many of the segments are unintentionally hilarious (particularly the one about the evil bucket), and as an adult you notice the extreme ‘90s cheesiness that you were oblivious to at the time.

Another source of entertainment is the presenter, Jonathan Frakes (or J-Frazzle as I like to call him), who hosts the show with a distinctive combination of solemnity and

Dad Jokes. After each segment he will discuss the story with complete seriousness, before rounding things out with some wordplay worthy of CSI Miami (“Is this story of the mysterious screwdriver inspired by an actual event? Or are we just... screwing around?” *YEEEEAAAHHH!!*) and toothily smirking into the camera.

Beyond Belief is a corny show, but it has an earnest and, at times, sentimental quality that gives it a particular charm. If like me you watched it as a young’un, I definitely recommend revisiting it – and, if you’ve never seen it, I recommend checking it out for the retro goodness.