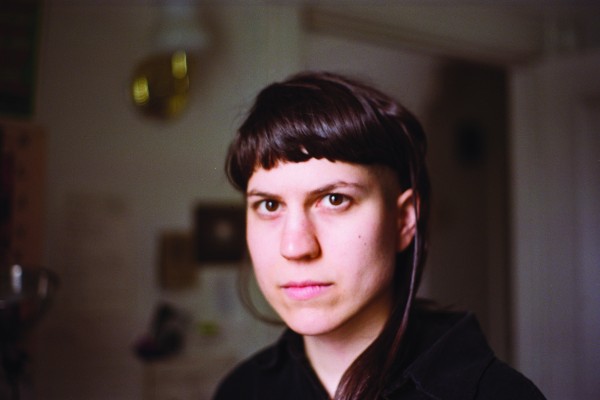 Earlier this year in March, on a rainy Sunday afternoon and post a whirlwind weekend of incredible music happening in Dunedin, I saw Montreal-based composer and sound artist Sasha Ford perform her solo electronic project Blankets at None Gallery. Blankets had also played the night before as part of the biennial Lines of Flight, New Zealand's longest running experimental music festival held in conjunction with Dunedin Fringe Festival. Blankets’ set stood out to me as a major highlight of the weekend in which she sculpted industrial and abstract sounds over minimal hypnotic rhythms using found cassettes, field recordings, and bells to create her sonic world. Compelled to find out more about Blankets I interviewed Sasha about her practice.

The title of your project Blankets is really interesting to me. Could you tell me about the origin of the name and what it means to you?

I originally picked that name because the project started as a harsh noise project and I wanted something very unaggressive and incongruous to the names of some other acts making those kinds of sounds. Musically I didn't entirely stay in that territory but the name still speaks to the main thematic interests of the project--vulnerability, childhood, domestic life, and formative experience.

Prior to Blankets what kinds of music projects were you involved with?

A number of different things. Mostly playing drums in a bunch of bands--various punk bands, a queercore powerviolence band, a Melvins-inspired grunge band. Before that I had a home recording project and released a solo album of multi-instrumental chamber-pop. I have also studied classical piano for most of my life and that has always been in the picture in a background way.

One aspect that I found particularly compelling from your performance at None was how gestural and dramatic your delivery came across. Is this purely spontaneous or is it more like part of the performance?

It's spontaneous and I don't rehearse that aspect in advance. It’s simply myself in a form of hypnosis with what I’m doing. But that doesn’t mean it’s some kind of “pure” revelation--I’m nonetheless on stage so its inseparable from being a performance in some way. At one show I played in Montreal, I was informed that an acquaintance of mine was genuinely concerned for my mental health, because I was appearing to be suffering so much during my performance.  My primary intention is not to cause people concern or distress but I do take delight when I can really access somewhat of a different reality for myself while playing. I’m grateful to performers who are generous with their presence, and that is a part of the work for me.

A striking feature of your live set was the way you utilized sampled material. I found this incredibly beautiful. Would you mind revealing something about your source material, how this is processed and the live decision making process?

I love when abstract music can manage to tie in passing narrative elements, so vocal samples have been a point of fascination for the duration of the project. I feel complicated about vocal samples; there is a convention in industrial and noise music of them being used in all kinds of boring or even thoughtless ways, and whole sets can rely on them too heavily. I do design work with collage for album art and show posters, and I've often thought of the analogy that the vocal sample to the abstract music set is like the inclusion of an image of a human face in a visual art collage: it's an element that can easily be defaulted to because it makes things very attention-grabbing right away. It's language entering the picture, giving an audience a concrete symbolic anchor in the midst of abstraction. Despite or because of these concerns, I have accepted that Blankets is a means for me to work through some of these things. My samples have varied from found tapes, digital speech generators, clips from a wide array of YouTube videos and online sources, and dramatized recordings of my own voice, but they usually stay quite thematically consistent. I’m mostly interested working with material that permits me to reflect on the unresolved internalization of social life. Both of my most recently released recordings are specifically dealing with the psychoanalytic conception of projection--Projections of the Magical Other does this in an absurd, satirical way, and The Wound of the Parent is the Trauma of the Child does so much more melancholically. During the recent New Zealand tour I was using part of a lecture by a Jungian theorist, as well as a home recording tape of a child and parent that I have had for a long time. The main political intrigue of the whole project for me is how I can use this material both as a subject of inquiry and as a methodology of some sort.

Another significant aspect was the rhythmical quality to your set. The rhythms kept a hypnotic pulse going whilst you experimented with more abstract methods in a way that worked amazingly and recalled to me elements of techno and industrial music. Would you mind sharing some of your creative influences, musical or other, which have informed Blankets?

The rhythmic element is a major point of focus for me, and I like to play with the threshold of its discernibility. There are a bunch of older industrial bands that probably influenced me in a more round about way, but the main inspirations for the project were contemporaneous ones. My friend played me Wolf Eyes' Dread when I was in high school and I became obsessed with it. I remember I even proposed ‘Desert of Glue/Wretched Hog’ as a soundtrack for a silent play in my Grade Twelve drama class. There is a moment early in that track where a minimalist eighth note pattern suddenly switches to triplets, and that moment is just totally golden for me. In terms of other bands, being from the West Coast I was for a time in the same social circle as Gabriel from Yellow Swans, and although I never got the chance to see them live, I was also very affected by their work early on.  I find the rhythmic quality of their records to be very sophisticated and enchanting, and to be even more interesting than the gorgeous stuff happening harmonically. And yes, I have always been obsessed with techno and dance music of many varieties as well. Techno aspects have been creeping into the project so much for a while that I recently started a separate intentionally dance-oriented project, called stehcy, just for that purpose. It is quite different from the Blankets material; it's the first time I'm trying to do very clean production all around. I love it though and I think it's a long time coming.

I hear you are based in Montreal, could you tell me a little bit about the positive aspects of the experimental music scene there right now?

A positive aspect would be that there are usually more shows going on than I even have energy to go to. Even though I think many of us here tend to get sick of the same venues we go to all the time, we nonetheless have a decent amount of places to have play and there are a general abundance of things happening, compared to most other Canadian cities.

Leading on from the above would you be willing to recommend some artists/ groups or projects stemming from the Montreal scene?

These days I would have to say that Urlapse are my favourite local name to see on a bill. They are a tape loops and sample-based duo with a very playful sensibility but a ton of precision at the same time, that at times reference conventions of certain dance music genres in a very oblique manner that I totally adore. As far as techno goes, I have really loved everything that Teo Zamudio has released recently. His work has a sombre and cinematic quality to it, but the one time I have seen him perform live his energy was utterly joyful and resolutely unpretentious and altogether beautiful to watch. In the more abrasive terrain, I really appreciate Devon Michigan’s long-standing project Ghost Taco. She uses an SM57 microphone inside of her vagina to make harsh and melodic ambient work. What is remarkable about this is that she uses this set up in a way that is totally not sensationalized or gimmicky--it is simply her primary sound source, just as tape machines or a certain synth might be the main component of a setup for someone else. Even with feminist performance art going back to the 1960s, this gesture still feels radical to me, mostly because of the entirely nonchalant manner of her approach. The last few sets I have seen of hers she has been getting really wonderful harmonic vocal loops going, amplified by way of the interior of her body.

As the founder and the curator of The Institute for Sonic Research, could you tell me a bit about the drives and aspirations of this research group?

The ISR is an intermittent series of experimental electronic shows that I book in Montreal.  The name is mostly to give the series a sense of continuity, and the "research" aspect is nothing more than the performances that take place at the events themselves--they are the research. I put a lot of intention into the lineups and promotion, and I try to have them at different venues and really ensure a good atmosphere. The vast majority of the artists I have booked have been female or non-binary identified, but I like to consider that an incidental part of the mandate; I just book musicians whose practices I find exciting. The last one took place at a queer wrestling studio, and the performers played in the centre of the ring. I took on too many duties at the show, doing promotion, sound, and also playing a set that night, so I was a bit spaced out. Few people know but I was also intending to smash a TV during my set, but the vibe in the crowd was so tranquil and calm, it felt inappropriate and way out of my comfort zone. It was a bit of a Sisyphean act because the TV was absurdly heavy and I just had carried up a whole bunch of stairs. That could be a good vision statement for the ISR though; “the power of a bunch of theoretically-smashed TVs.”

What do you have coming up for Blankets?

In June, I am playing at the Suoni Per Il Popolo festival in Montreal, which is a fantastic annual festival of a number of genres that tends to be a highlight of the year for me. I am playing the same show as Moor Mother, a heavy industrial hip hop act from Philadelphia who I'm extremely excited to see. I am slowly starting to feel out possibilities for more overseas shows next year but things in that regard are in much too early a phase to really talk about yet.