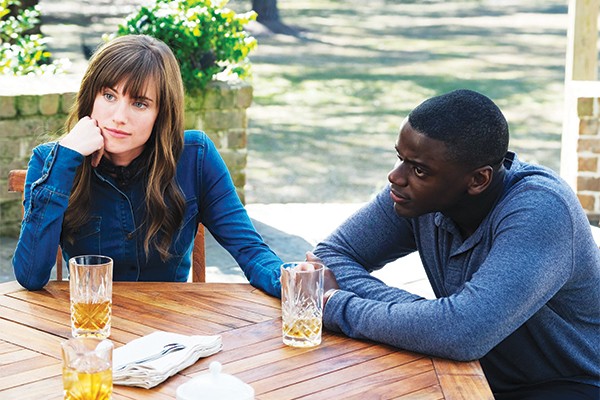 Get Out is a recent, somewhat controversial, horror film. Chris Washington (Daniel Kaluuya) is a young black photographer accompanying his new white girlfriend, Rose Armitage (Alison Williams), home to visit her parents. Early on Chris asks her if she had told her parents that he is black - obviously conscious of what they will think of him. She reassures him that they are not racist, and that everything will be fine. Once there, Chris meets her seemingly warm and welcoming parents (Catherine Keener and Bradley Whitford). They have some bizarrely behaved black housekeepers, who Chris attempts to connect with but is immediately rebuffed. Upon finding out that Chris smokes, Rose’s parents urgently insist that he stops. Rose’s mother, Missy, offers to hypnotise him into quitting, but Chris turns her down. The interactions with Rose’s family become increasingly uncomfortable as the film wears on. All is not as it appears to be with the Armitages.

There is something spectacular about watching a horror movie where the black character is not just an expendable victim in the opening scene, but a character whose story we actually follow and empathise with. Following the film’s release many viewers took it to be a racist, anti-white film. It appears a lot of white viewers rejected the idea of being portrayed as the villains of the film. This reaction is particularly tragic seeing as this is one of the few horror films that actually encourages the audience to empathise with a black character. Consider the thousands of horror films, shows, and novels based entirely around the idea of ‘savages’.

Without many scenes actively depicting horror, this film manages to be consistently unsettling throughout, leaving the viewer unsure of what is going on and who to trust. The interactions with Rose’s family and friends become more and more unsettling. Each old white person treats Chris bizarrely, in ways that can be mostly dismissed as micro aggressions. However, each moment slowly compounds, to create an eerie atmosphere through the entire film.

Jordan Peele’s directorial debut is impressive. Get Out is a ridiculously good movie. It’s entertaining, unnerving and satisfying. I highly recommend that everyone takes the time to see it.

Tags:   review film culture get out