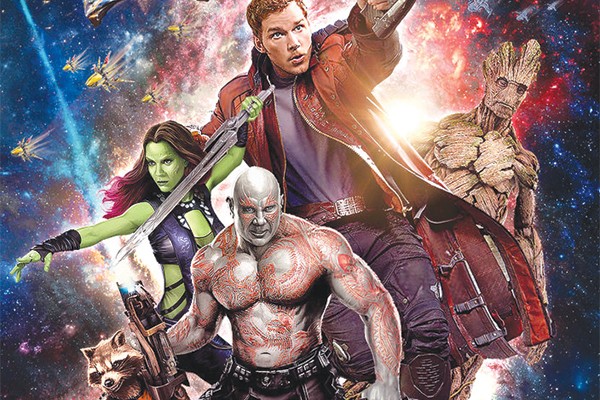 Let’s praise the Lord one more time for Chris Pratt! Although Andy Dwyer will always hold the number one place in my Chris Pratt dedicated heart, Peter Quill has come a mighty close second after the latest instalment of Guardians of the Galaxy.

In this film, we learn about Quill’s heritage and we’re introduced to his father in a creepy af opening scene. Creepy because it involves a 2016-aged Chris Russell making out with a young girl while his makeup and hair are trying (but failing) to make him look 30 years younger.

But in all seriousness, this is a movie which will be enjoyed by all types of people. Even if you don’t like a single Marvel movie, you should go see this flick.

We are reunited with the Guardians just as we left them except with a much smaller, far cuter, Groot, as they are hired by the Sovereign planet to protect some valuable batteries. In true Guardian style, Rocket steals some of the batteries they were supposed to be protecting and they are then pursued by the Sovereign and crash into the nearest possible planet. The ship is in a bad way after the landing but Ego, Peter’s dad, finds them and takes Quill, Gamora and Drax to his own personal planet while Rocket repairs the ship. Only of course, all is not as it seems with Quill’s happy reunion and other people/aliens are after the Guardians.

Thus, we are reconnected with Nebula, the crazy blue sister with serious self-love issues and Yondu, Quill’s blue foster father of sorts. There is unrest in Yondu’s crew and mutiny occurs but as per usual, people should never mess with someone who can control a deadly arrow with his whistle.

The soundtrack is full of epic ‘80s jams as expected and Drax’s literal language is not over-played. Basically, Volume 2 has it all – love, jokes, tears, giant slug monsters, redemption, guilt and reconciliation. Once again, Marvel is killing it in the cinematic world.