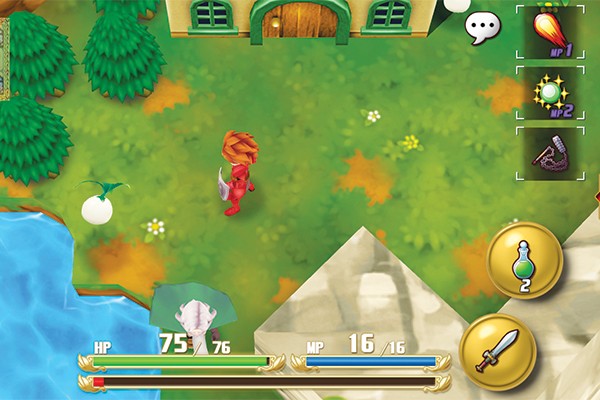 Adventures of Mana is a remake of the 1991 action RPG Seiken Densetsu: Final Fantasy Gaiden (or Final Fantasy Adventure). The original is seen as something of a classic, though not nearly as much so as its sequel Secret of Mana, and developer Square Enix seems to be giving the series a lot of new attention, with a re-release of the whole trilogy for Nintendo Switch on its way.

For better or worse, Adventures of Mana is almost an exact remake of the original in everything except visuals and music. You play a self-named hero who breaks free from his imprisonment by the Dark Lord, teams up with a heroine (also named by the player), and embarks on a quest to protect the Tree of Mana, a source of life energy. The gameplay is fairly fast-paced, standard action-RPG fare, with a cool arsenal of weapons that each function in a unique way. There is a solid blend of puzzle elements and action, some of both become a little tedious or repetitive, but there’s a charm to the simplicity.

The soundtrack has been recreated beautifully, freeing the impressive original soundtrack from any of its original sound hardware limitations. Adventures of Mana not only features a full instrumental score, but also the ability to switch between this remake’s and the original’s soundtrack.

Unfortunately the visuals don’t seem to have been handled with quite as much care. While the world is full of vibrant colour, there’s no interesting stylisation to be found, the world and characters could be from any generic fantasy mobile game. That’s a shame, given the care Square Enix gives to visuals in most of their titles.

When it comes down to it, Adventures of Mana is better than 90% of mobile games, if only because it’s a fully complete game, with no microtransactions twisting your experience. The controls are much more satisfying on the PlayStation Vita than on a smartphone, but useable on either. Adventures of Mana is a good timekiller, though if you’re already a fan of the series you may just want to wait for its re-release on Switch.