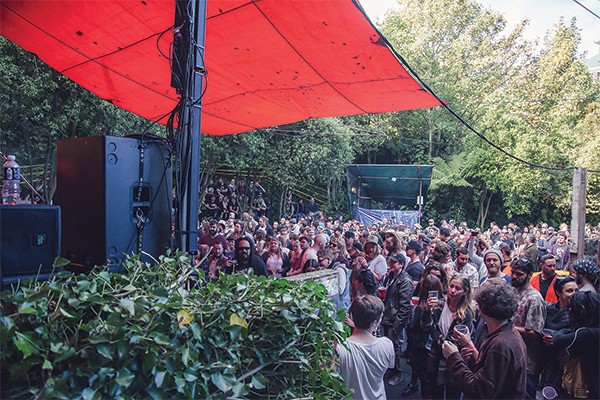 In the depths of Refuel at 1am Zac Nicholls of fuzz-rock group Koizilla gleefully chimed to a loyal and hazy crowd “we have two songs left, and then Feastock is over.” Koizilla brought the curtain down on the ninth installment of what has become a centerpiece of the Dunedin music calendar.

Despite relatively expensive tickets ($40 for a day and night pass), the 20 bands on the bill provided a wide array of musical offerings, allowing everyone to get their money’s worth, plus the event was BYO with a free BBQ provided.

To start off, 300+ patrons enjoyed a balmy autumn day in the backyard amphitheater of 3 Fea Street. People sat amongst the secluded tree lined perimeter of the backyard or congregated in front of the stage, which slowly became a dance floor as the festival-goers got into the spirit of the day. They were helped along the way by performances from Jo Little & Jared Smith, Élan Vital, Oleh, Ambulant, Otepuni Moonshine, Julian Temple Band, Killergrams, The Shambles, Tiny Pieces of Eight, and Space Bats, Attack!

The crowd was mainly local hipsters, musos, and dreadlock wearers, but notably not many students. This might perhaps be due to the geographical location (why battle up to Pine Hill when one can just enjoy a doof at the Cook after all?). One familiar face from previous years wore a T-shirt printed with the face of Feastock’s main organiser, and joyfully proclaimed “Happy Feastock” to me upon our meeting.

As the sun lowered beneath the hill and the evening chill began to set in, buses ferried people to Refuel where the show continued late into the night, undoubtedly much to the appreciation of the Fea Street residents. The Vortz, Tahu & The Takahes, The Mentalist Collective, The H3rd, The Rothmans, Iron Mammoth, Soaked Oats, Left or Right, High Twitch Athletic Club, and Koizilla all took to the stage at Refuel.

Élan Vital provided one of the strongest performances of 2017; their dark pulsating synths and beats, underpinned by softly sung vocals, were one of the day’s highlights, though they played inexplicably early. I for one would have loved to have seen them command the stage later in the day once the sun had set.

Another highlight was Space Bats, Attack! who delivered powerful guitar driven songs that sounded like nothing you’ve ever heard, thanks to the pedal wizardry of the band’s central component Lee Nicholson. Rounded out by the Nicholls brothers (Koizilla) and Richard Ley-Hamilton (Males, Asta Rangu), Space Bats, Attack! had an astounded crowd in the palm of their hands for the entirety of their 30 minute set.

With 2018, the ten-year anniversary of Feastock, talk is already circulating about who might appear, might we see an all-stars lineup? Whatever the lineup, on gauging the success of 2017, Feastock 2018 will be an event not to be missed. Happy Feastock indeed.