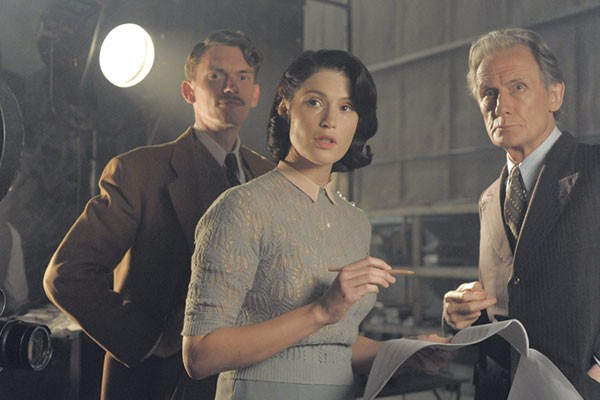 To call Their Finest a British comedy, as many reviews have, is difficult, as it doesn’t provide the classic, almost slapstick, comedy that one associates with British comedy. But there is still that hint of sentimentality whenever the British signature shines through.

The film follows the events of a film being made about Dunkirk during the chaos of World War II, following scriptwriters Catrin Cole (Gemma Arterton) and Tom Buckley (Sam Claflin) as they attempt to bring some form of creative license to the big screen. However, their efforts are squandered by the intervention of snooty actors (Bill Nighy) and silver-tongued executives (Rachel Stirling). The mere fact that it is a film about the process of making a film (albeit during WWII) offers certain reflexivity for the viewer. One becomes aware of the tropes of filmmaking and that the very same techniques and scenarios that potentially could have happened during the production of the very film you are viewing.

What does break from the ‘comedic’ storyline is the insistent interruption of WWII. Numerous moments in the film show the impact of the war on everyday life. These moments of difference potently set the film in that particular period without becoming predictable.

However, as this is a film about males and females there had to be a romance subplot. While not in one’s face throughout the entire film, the key moments when it was foregrounded (particularly towards the end) were predictable to say the least. While a well placed twist at the film’s climax did provide some surprise, it still couldn’t detract from the damage already done.

The film has its flaws but it is still charming in its own right. It was well casted and was impactful in numerous scenes, but I just wish films would stop stuffing in unneeded romantic subplots.