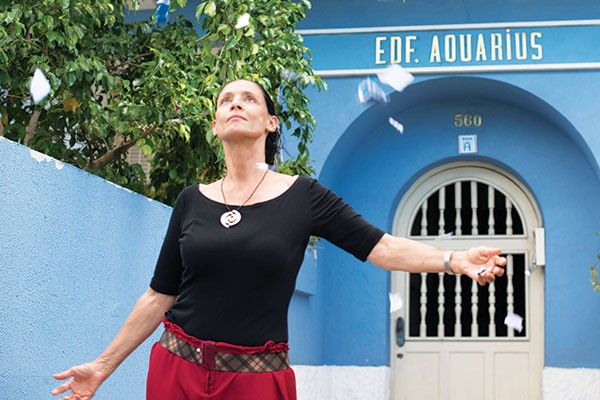 Dona Clara is a Brazilian Battleaxe. Her strength and stubbornness have even fought off cancer. Aquarius is named after her home: a block of apartments being bought out by a development company. But Clara is a force to be reckoned with, and she has decided she will stay at the Aquarius until she dies.

Do not be fooled into thinking this film is a simple David and Goliath story; it is far more nuanced. While the tactics the company uses to try to vacate Clara’s apartment grow more bizarre, Clara herself is slowly revealed to us in three parts; Clara’s hair, Clara’s love and Clara’s cancer. Once again, it would be foolish to assume that these segments are addressed evenly, or that they even relate to the titles given. Aquarius doesn’t play into its own structure, rather it uses the titles to mislead the audience, but also give Clara ownership of her external reality. Take Clara’s love for example, this segment begins with a potential romantic encounter, which is cut short by the emotional discomfort of a previous mastectomy. Aquarius then opens up to show the real love of Clara’s life: her music and her relationships with others.

The film is lengthy, and I would call it a ‘slow burner’, however the significant run time did not bring the usual drag. Sonia Braga’s acting as Dona Clara was simply magnificent; I would go as far as to call it impeccable. She flawlessly encapsulates a very complex character. I have some minor grievances with some of the technical aspects of Aquarius, such as the retro-looking zooms and fade-outs, which I found distracting and out of place. I applaud director Kleber Mendonça Filho for not shying away from presenting the actualities of life. From cleaning up after babies, to unabashed sex scenes, it was refreshing to see the raw truth of being human displayed on celluloid. It is almost as confronting as Dona Clara herself; Aquarius is an understated, truthful, and thought-provoking foreign film.