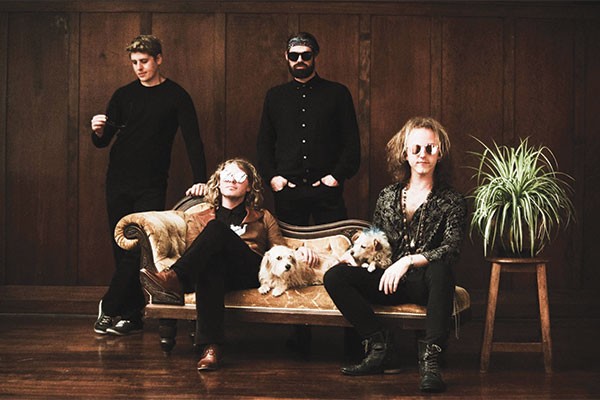 I had to throw away the bean metaphor. It wasn’t working. I was trying to say something about the bleak future of modern rock. Can anything really exciting and new come out of this genre? And by saying new I don’t mean NEW NEW because rock ‘n’ roll is locked down to conventions and if it breaks away from these it becomes, well, something else—like ‘brunchcore’ for instance. I made that up but you can imagine what it might be and, let me tell you, it’s awful.

I can’t remember the last time I heard a rock band and BAM it immediately had my full attention. That’s what rock ‘n’ roll is right? Immediacy! POW! That direct address! WHAM! I don’t want something to plead for my interest, like a toddler having a tantrum; there’s plenty of that to go around, like this album.

The River Jesters are a local band and, for the most part, I support local music. In return I want that band to offer something back, something that they can call their own. But to create something new the mimetic process has got stop, unless you’re a cover band, then you need it, but DE RIV J'S haven’t quite broken that mold. They can all strum, pluck, whack, and sing in a very conventional manner, as if they’ve learned to play their songs from an online instruction video in preparation for an audition on X factor NZ. Sure, they’ve got nine original songs on ‘Beautiful Mire’ but they sound bogged down in endless renditions of Mustang Sally, perfected renditions of John Butler Trio hits, Red Hot Chili Peppers, wordless choruses consisting of vocal noises like their song ‘La Ba Da’. Generic guitar music made by men (needs an acronym), the wankery, that brand of composing when a three minute pop song can’t be locked down and in a mad panic it jumps from one cliché to another. It’s a self-conscious defence mechanism, trying not to be boring, as is the case on the unfortunately titled ‘Dream Burlesque,’ which I will admit has an OKAY Sabbathy chorus, but it’s in sour conflict with the waltzing verses.

The thing I can’t get past is the vocal gymnastics. The delivery of the vocal melodies, yes all of it, it’s not my bag, sorry. It’s too desperate, too strained, too cocky, as if their primary function is to disguise how awful the lyrics are. Obviously on the funking ridiculous ‘Lost in Translation’ (yes it’s about Bill Murray), there’s no point trying to hide them, but on the rock ballad ‘Take Me Down’ repeating that line so many times over the course of seven minutes with that hideously affected vocal is unforgivable. Thematically it doesn’t get much worse than the album’s six pack faux glam can opener about clothing items and not dressing like a man on ‘Saturday Night’. It’s a parody, just some confused superficial masculine drama, as are most of the other tracks here. It might explain their shared love of Bill Murray. It does not explain the song about a truck driver.

I can’t stand vile exhibitions of musical prowess. I do care about how that skill is applied to the songwriting process. Taming egos, discarding slabs of convention if need be. Unlearning. If songwriting is de Are Jay's thing they should get down to writing a song. If it doesn’t need a guitar solo, don’t squeeze one in. Let it go. We need more good songs, not parading exhibitionists. It’s glaringly obvious that the RJ’s are seeking the attention of mainstream audiences and if they want to make a little money, that’s fine too. But they need to write some coherent lyrics. It really wouldn’t hurt their prospects, neither would a name change. So please, the River Jesters and all those with similar musical inclinations, give something back to rock ‘n’ roll. You’ve taken heaps away. You owe it.