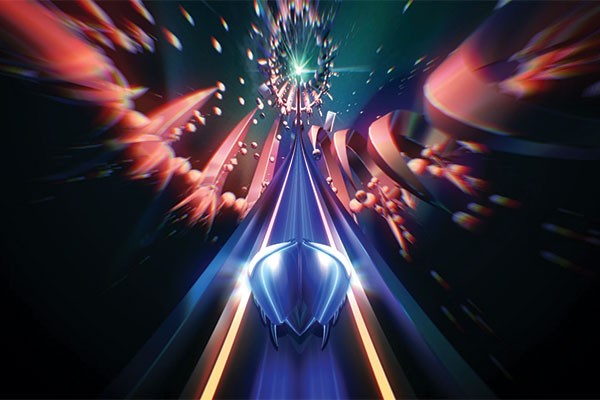 Rhythm games are usually defined by musical melodies. With the Hero games, whether they are of the Guitar, DJ or Band variety, you are tasked with recreating a specified popular song, with the effect of getting to feel like you are on stage with one of your musical idols. Even in the case of the Stepmania or Dance Dance Revolution games, the intention is to make you feel like a skilled performer.

In the case of Thumper, the intention is a bit more abstract. This is a rhythm game in which you are a large metallic beetle riding along a single rail through space. The goal is simply to reach the end of each of the game’s nine levels, detonating lights, grinding along corners, jumping over spikes and breaking through barriers along the way. You bear no resemblance to anything in reality, and the game embraces this in a couple of ways.

Thumper touts itself as a “rhythm violence” game, which sounds self-indulgent, but it’s actually understandable. Everything in the game has been designed to feel impactful and heavy. You turn corners by smashing into them, you get extra points by detonating lights in a particular pattern, and you are constantly avoiding lasers and obstacles that can absolutely destroy your beetle. You have one line of defence, your metal wings. You can make one mistake, after which your wings will burst. If you get hit after your metal wings have been smashed off, you dramatically explode and restart at the last checkpoint. Furthermore, rather than have any melody, the game’s music is primarily drum-focused: difficulty is determined by its tempo and beat patterns. As you glide along the rail, all of the explosions that you cause feed back into the percussion. It’s impossible not to feel your heart rate rising.

Far more interestingly, Thumper’s aesthetic is almost that of cosmic horror. Your resilient bug and the rail it rides on are made of shining metal, but you are constantly diving through an endless, shapeshifting abyss. As the game progresses, the viciously pounding drums are combined with searing strings, distorted human screams, and a haunting piccolo that dances chromatically during the game’s few eerily quiet moments. These quiet moments come as a welcome respite in the middle of the levels, but their calmness is offset by what look like fractal spider legs that grip and weave around the rail.

Additionally—and this is uncommon for a rhythm game—each level contains three bosses that scale in difficulty. The first two are usually some kind of geometric shape, but can also look like giant sea creatures. However, the final boss of every level is always a giant, distorted, mummified, shrieking human face. It is the same final boss every time, but it gets increasingly grotesque and disturbing as the game goes on, until in the last level it is utterly unrecognisable as anything human. Seriously, for a rhythm game, Thumper is stressful.

Thumper has garnered a reputation among gamers as being absurdly difficult. Having managed to get through the first seven and a half levels, but unable to go any further, I can attest to this. Thumper is fair and well-structured in how it teaches its mechanics, and even has a fairly-graduated difficulty curve, but the last two levels are just ridiculous. You can look up videos of the last level to get a feel for the lightning-fast reflexes that are needed just to survive, let alone get a decent score.

If that wasn’t enough, the most difficult challenge of the game is self-imposed. Beyond just completing the levels in one piece, the game gives you a letter grade based on how well your run of a particular level was. An A-rating is not enough; the challenge is to get the elusive, golden, perfect S-rating. This means that you are not permitted to make any mistakes at all, or you will wear away your R key by hitting it to quickly restart from the last checkpoint.

Thumper is a true challenge. If it isn’t making you sweat profusely or tear out your hair in frustration, it tests your ability to stay calm under a surprisingly intense pressure. For a rhythm game, that’s impressive.

Warning: Do not try to play this game in a moving car. The combination can very easily induce nausea. My friend and I found this out the hard way.