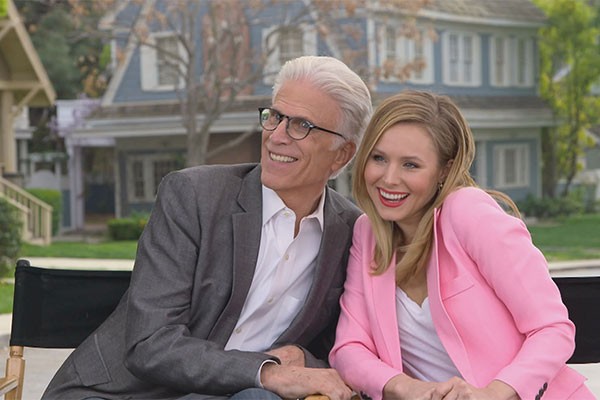 In the pilot episode of The Good Place, Eleanor Shellstrop (Kristen Bell) is sitting in a perfectly pleasant waiting room. Michael (Ten Danson) calls her into his office and explains that she has died, and she is now in the afterlife. He assures her that she is in “The Good Place” and not “The Bad Place”.

The Good Place is where the absolute best of the human race go to when they die. In this world, everything you do over your life gives you a score. Eventually, when you die, this score is taken into account, and only those with the very highest scores are admitted into The Good Place. Don’t ask about The Bad Place. Eleanor is in The Good Place because of all the humanitarian work she did during her life. Michael takes her to her new home and introduces her to her soul mate, Chidi Anagonye (William Jackson Harper), an ethics professor from Nigeria.

Once she has a promise of loyalty from Chidi, Eleanor reveals that she is not who Michael thinks she is. While her name is correct, all the things she supposedly did over her life to earn her a spot in The Good Place was not her. In fact, Eleanor is a selfish person who never did anything for anyone other than herself during her life on earth. Desperate to stay in The Good Place, she asks Chidi to teach her how to be the kind of person who deserves to live there.

Despite this quirky little show only starting up on the 19th of September, it is intriguing, interesting, and sweet. It’s a strong start to something which is a fairly bold and bizarre concept, and the pilot pulls it off fairly well. Some of the jokes didn’t land, and the performances aren’t quite perfect yet. However, the brightly coloured neighbourhood with houses designed to match the personality of the person inhabiting it perfectly, and frozen yoghurt shops everywhere, make it look like a magical, heavenly place. I mean, who doesn’t love some froyo?

Overall, it was an intriguing pilot, and it’s definitely something I’m going to keep my eye on over the summer.