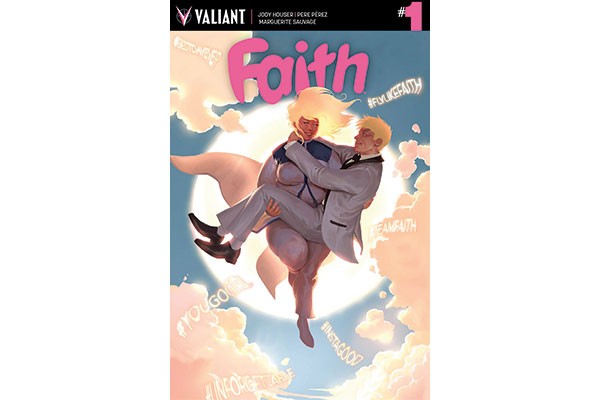 Valiant Comics’ recent volume follows the adventures of Faith, a telekinetic super heroine. She’s a big comic book nerd now living her dream as super lady flying through the air, kicking ass and saving lives. Previously Faith was a part of the supergroup Harbinger Renegades, but has broken away to try her own thing for a while. When other supers begin to vanish, it’s up to Faith to sort shit out.

Jody Houser’s comic book debut doesn’t disappoint. The writing effectively creates this woman who has fantasies, desires, goals and dreams. Her motivations are broad and complex, and totally relatable. Dialogue is executed well, not suffering from the sometimes forced and stilted feel of some comics.

The majority of the art is interesting though not necessarily a style I enjoy, but certainly a common and popular style. The lines are thick, it feels kind of 3D, and it makes every character look ugly. The expressions are empty - they look digital and soulless. Motion feels unnatural and most characters, regardless of what kind scene they’re in (be it action or rest), appear to be posing or standing still; it doesn’t feel natural. In good comic art, the images would feel more fluid and you’d be able to see the motion and action between panels. I would take messy pencil art over the filled in digital style that’s quickly becoming popular in comics now. I can appreciate the skill and effort that has gone into the artwork, but it just doesn’t work for me.

However, the fantasy sequences throughout each issue are drawn by the ever talented Marguerite Sauvage. They’re beautiful just to look at, and kept me lingering on those few pages a little longer. It made me wish she had done the art through the whole graphic novel. Perhaps this was the point, as they are fantasy sequences afterall. The cover art for the volume is awesome and the cover art for each individual issue is also fantastic, it’s part of what attracted me to the comic in the first place.

Despite my complaints about some of the art, I still thoroughly enjoyed the story. This is probably the most I have ever related to a comic book character. She’s overweight, blonde, a big nerd and a writer. Faith does her thing and kicks total ass while doing so. Her weight never defines her character - she is just fat, double chin, big belly and all. It’s not brought up by others, and her ability isn’t questioned because of her size. She’s not objectified, fetishised or made into a joke. She can fight, fly, use her powers and attract hot men along with the best of ‘em.