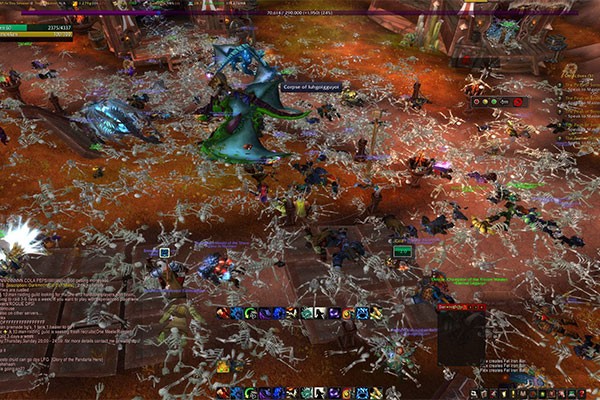 Massively Multiplayer Role Playing Games (MMORPG’s) are online based games that allow players to engage with each other cooperatively or aggressively. The most recent MMORPG to hit the markets was No Man’s Sky, a game boasting over eighteen quintillion (1,000,000,000,000,000,000) ‘life size’ planets, each with their own unique flora and fauna for players to photograph, trample over, capture, or kill. Given the size, it is reported that there will always be uncharted sections of space. Sadly the game did not live up to expectations. The biggest selling point was that players could interact with each other (which is the entire point in an MMORPG), but at the time of writing, the game is essentially nothing more than a glorified single player game with no real objective, and no real difficulty.

Putting aside the gaming aspect of MMORPGs, the social structure is far more comprehensive than many people would consider. Two of the more popular games, Eve Online (EO) and World of Warcraft (WOW), boast universes where players can act how they want to. What makes EO unique is that unlike WOW, which has distinct servers that limit player and guild interactions, EO is one large complete system and this was demonstrated during the Bloodbath of B-R5RB.

Taking place near a space station in the star system of B-R5RB, it is arguably the largest player versus player battle to date. An infographic by Elena Melkan notes that on and around 27 January 2014, this online space battle had 7,548 unique participants. The total cost of the battle was eleven trillion ISK (the in game currency), roughly $450,000 NZD today. At a Fanfest 2014 presentation, the head fleet commander Bryan Murph stated that the twenty-one hour battle was unplanned. Further research uncovered that in fact a user’s monthly subscription had lapsed, which left a space station unsecured, and an opportunity was seized upon.

The second interesting aspect to MMORPGs is the economic structure and its influence on real world markets. World of Warcraft is a fantasy based game where players fight and upskill, form guilds, trade, and go on raids. This differs from EO not only in the genre, and the size of the world they inhabit, but is arguably the more popular of the two. Figures released by MMO Champion show that at WOW’s height in 2010, there were twelve million players. Wowuction.com is a website which displays the average market price of goods. WOW gold can be bought and sold for approximately 50 cents NZD per 1000 gold, depending on the website, the market, and the respective factions and servers. Likewise there is a market for items, with one steel forged axe worth 36 gold was selling for about $158 NZD. I believe that the economic systems in MMORPG’s would provide potential avenues to devise new market theories applicable to virtual currency like bitcoin used in the real world.

So why do we need MMORPG’s? MMORPGs provide a community that some people might not have access to. To form guilds and go on raids, or wage twenty-one hour space battles with over seven thousand people means you form friendships, gain mutual respect, and probably sworn enemies. Andre Meadows notes in his web series ‘Crash Course Games’, a funeral was held for a WOW character of a woman who had died in the real world. Yet as unarmed individuals lined up to pay their respects, they were ambushed by a rival guild. Did the rival guild cross a line? Someone could write a paper exploring the ethics of real world driven character actions in a fictional universe. That would make a great read.

MMORPG’s provide ways for people to maintain contact and form friendships with individuals that they might never meet in real life. While not a gamer of any substance, I can see the draw to such games, and how they provide avenues for people to escape the mundanity (and tragedy) of the real world.

TL;DR—MMORPGs provide an escape for those who need it, yet emulate real world social structures. Also, check out WOW’s “Corrupted Blood” incident.