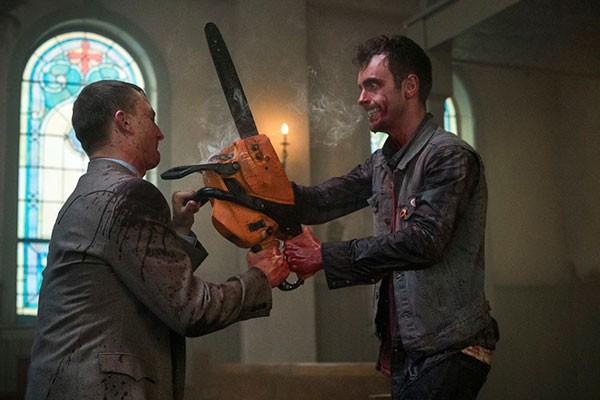 Preacher is an adaptation of the popular graphic novels of the same name that came out earlier this year. Jesse Custer (Dominic Cooper) is an ineffectual preacher in a small southern American town. His goal is to find God, despite no longer actually feeling as though he’s in a conversation with him. Jesse has a violent history behind him, as evidenced by the entrance of his ex-girlfriend, Tulip O’Hare (Ruth Negga), a badass with a gun, trying to coax him back into the game.

Throughout the pilot episode we watch Jesse struggle with the people in his congregation, with the corruption of one particular asshole driving him to lay the smack down in one hell of a bar fight. Jesse’s a fighter, he’s strong, and he totally thrives in the violence. Cassidy (Joseph Gilgun), an Irish vampire, befriends Jesse at the bar, and even helps him a little.

Meanwhile, the episode also follows a mysterious force moving across the world, inhabiting religious leaders, before exploding them brutally. Literally exploding—with body bits everywhere. Predictably, the force reaches our Jesse Custer by the end of the episode. It inhabits him, and instead of exploding him, gives him the power to make anyone do exactly what he tells them to do. Neat! Just what a struggling preacher with a difficult congregation needs.

The pilot to this show is fun, bombastic, violent, over the top and exciting. If you’re a fan of the comics— while some things are changed in the adaptation, as they always are—the premise stays fairly true to the overall story and characters. I know some fans are unhappy with the portrayal of Eugene Root, AKA Arseface (Ian Colleti). However, I think it’s impressive that the writers kept in a character whose face is twisted and distorted into looking like an arsehole. It shows some real commitment to the source material. If you’re into the supernatural, violent, and fun shows, then I would totally recommend this one. It’s definitely worth a watch, and the whole first season is only 10 episodes, so it is definitely easy to consume quickly.