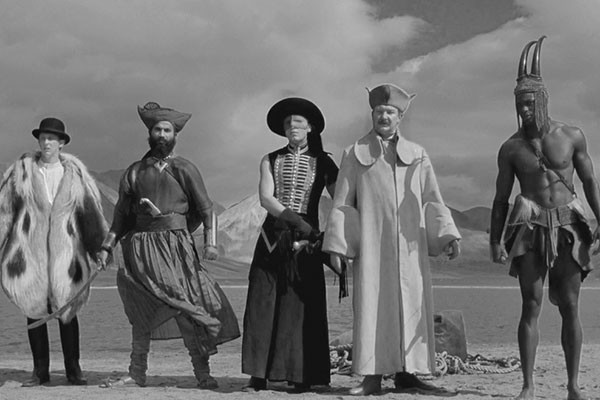 Alexandria (Catinca Untaru) is a young Romanian-born girl in a 1920s Los Angeles hospital with a broken arm. She fell picking oranges at an orchard her parents work on. She barely speaks english, has a strong and healthy imagination, and spends her time wandering around the hospital with her arm sticking out awkwardly. Enter Roy Walker (Lee Pace), a movie stuntman who has also fallen during his first film and is possibly now paralysed. The two form a bond after Alexandria asks him to tell her stories. Due to Alexandria’s intense imagination, and Roy’s fractured state of mind, the line between fantasy and reality starts to fade away.

Roy tells an epic fantasy story about five heroes to Alexandria. The story is rich with subtext, beautiful to watch and genuinely interesting. The visuals in this film are like nothing else I have encountered. As Roy tells his story it unfurls on camera flawlessly. You can see visually how Alexandria and Roy’s minds are forming the imaginary scenes, with the doctors and nurses and patients playing the characters in his story.

Singh funded most of the film himself, as he wanted it to adhere to his vision. It was filmed over four years in over 20 different countries. It’s an absolutely stunning thing to behold; a total labour of love.

The relationship between Roy and Alexandria unfolds naturally, and feels real. This is mostly because it is real. Catinca Untaru didn’t speak much english, so portions of the scenes between her and Lee Pace are unscripted. They hid the cameras during hospital scenes so she would behave genuinely, and some of her confusion due to the language barrier resulted in a major plot point in the film. Singh also had Lee Pace remain in bed for a lot of the early filming, so as to make the other cast members believe he couldn’t walk for more realism in their on screen interactions.

The Fall is without a doubt my favourite movie of all time. It’s interesting, sweet, sad, beautiful, and something more people need to see.