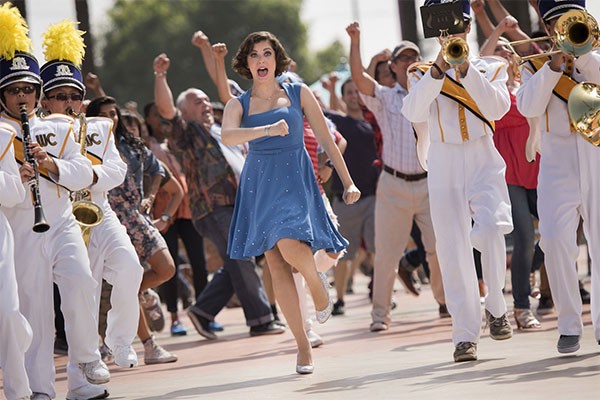 Rebecca Bunch (Rachel Bloom) is a successful, career focused, big bucks lawyer —who is unsatisfied and unhappy with her New York life. During a panic attack over a promotion, she bumps into total heartthrob Josh Chan (Vincent Rodriguez III) her summer camp boyfriend from when she was 16. He tells her he’s moving back to his hometown, West Covina, after finding he didn’t like it in the Big Apple. This encounter results in Rebecca impulsively moving to West Covina to find happiness again - she’s totally not relocating for her ex, that would just be craaazy.

This is a musical TV show. Rachel Bloom was a Youtube star famous for her parody pop songs. She was approached by Aline Brosh McKenna, writer for The Devil Wears Prada, and the pair worked together to produce pretty much the best TV show of last year.

The cast is refreshingly diverse and there’s decent representation of multiple ethnicities and sexualities. It has been lauded for making the main love interest a Filipino male when most would only cast white men in such a role.

The songs are the main star and really pull it all together. There’s around two in every episode, and it shows the level of talent involved in not only the cast, who can all sing and dance, but also the writers, composers and choreographers. The songs are hilarious and on point. No other show would have a song dedicated to the problems experienced by those with “heavy boobies” which are described as being “dense like dying stars”, or feature a pop parody about bisexuality including these tasty lines: “It’s not a phase / I’m not confused / Not indecisive / I don’t have the “gotta choose” blues / I don’t care if you wear high heels or a tie / You might just catch my eye.”

It’s incredibly clever, funny, entertaining and has won a bunch of awards. Season two is set to start up on October 12 so you’ve got plenty of time to catch up.