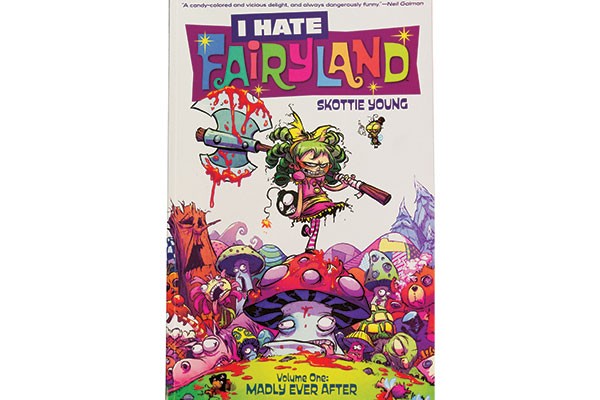 It’s almost every child’s dream to be transported to a mystical fairyland to complete some complicated and epic quest, making bizarre and cute friends along the way, right?

The eight-year-old Gertrude might have fantasised about Fairyland, but she certainly wasn’t equipped for the journey. After being sucked into Fairyland while playing in her room, she falls to the ground, breaking bones upon landing. Surrounded by fairy creatures, she is told by the fairy queen that all she needs to do is retrieve the key and find the magic door in order to return to her realm. She’s given a sidekick who has the handy power of healing, and carries a map and instructions to help her on her way. Gertrude reluctantly begins her mission.

I Hate Fairyland is a black comedy graphic novel which explores what happens when a child is actually faced with the trials of Fairyland. We are transported 30 years into the future where Gertrude is still trying to locate the key. Gertrude may not have physically aged, but she is in fact a 36-year-old. The result of growing up in a child’s body in a warped reality like Fairyland? You have a violent, sadistic, horny, bitter and angry person. You watch as she rampages about Fairyland, messing up almost all of her opportunities to succeed in her quest home, and leaving a bloody trail of bodies behind her.

Skottie Young makes his debut for Image Comics in this funny, gruesome and dark graphic novel. Penning both the story, and the extravagant, candy coloured and over the top art, Young manages to create a distinctive and twisted story. He plays with the idea of Fairyland being this desired and sought after place, considered a treat or a dream for children, and instead puts forward a more realistic spin on the concept. Being forcibly transported from your home and trapped in a world where you are expected to overcome a series of riddles and challenges purely just to make it home again is messed up. It’s even more messed up when you think about the age of the children in these kinds of stories, and there’s another layer when all the while you’re expected to want and love this.

If you’re into alternative fairytales, this might be something for you to look into. While this comic is likely to give you a few belly laughs, it is very violent—so not for the faint of heart. If you don’t like blood, keep your distance.