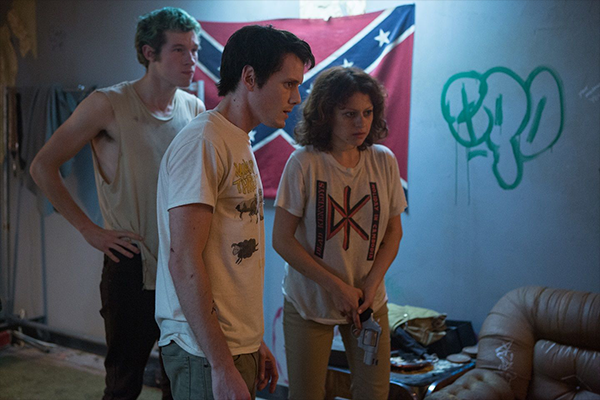 A broke punk rock band by the name of the Ain’t Rights takes a detour to a remote Oregon roadhouse, to play a gig in hopes of making some money after a dismal turnout at their last gig. They’re promised a decent pay and so make the trip using syphoned gas. When they show up, they find that the place is swarming with white supremacists. They choose to open their set with a cover of “Nazi Punks Fuck Off”, enraging the crowd, before going on to their original songs. They get their money and begin to load up their van to head off. However, the bassist, Pat (Anton Yelchin) witnesses a murder scene and the group are forced to stay against their will. The band members and a young woman (Imogen Poots) barricade themselves in the green room, demanding the police.

Green Room is a thriller and slasher combo at its core, with every scene building towards the eventual climax. Even before the band gets mixed up in the drama, the scenes in the bar leading up to and during their set leave you feeling tense and uncomfortable­—something bad is about to happen, you just know it.

There’s not many moments in this film where I found myself scolding the characters for being so stupid as I normally do in slashers. Their actions and behaviour, under the circumstances, seem reasonable to me. They’ve been thrust into this situation and they all react differently.

What brings the film together more than anything else is the superb acting from everyone involved. The other band members, Sam (Aila Shawkat), Reece (Joe Cole) and Tiger (Callum Turner) are great. Patrick Stewart makes for an unsettling villain, leading the neo-Nazi organisation. He was believable and creepy as he delivered calm instructions to the entirely expendable white supremacists under his command. Imogen Poots is clever, bad ass and interesting. Green Room is one of the late Anton Yelchin’s last films, showcasing his talent and variety in the film industry. Overall, a good slasher film. Not necessarily the best ever, but definitely up there and worth a watch.