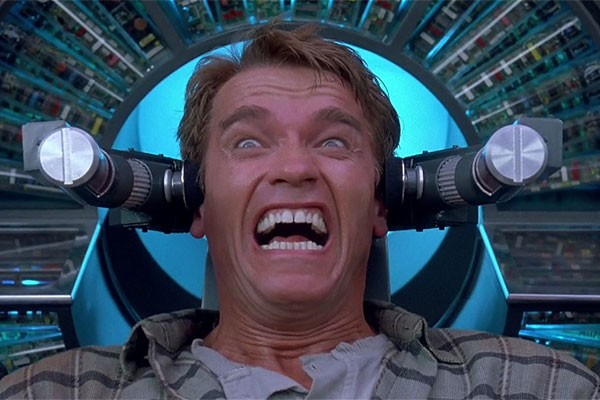 The film opens with a Martian landscape, with two moons, and a stifling red sky. A man and woman hold each other’s leather-gloved hands, and give each other romantic stares through the viewing windows of their spacesuits. Then the man trips, falls, smashes his helmet, and starts gasping for air. His eyes bulge and his tongue protrudes. The blood vessels in his face begin to burst and he clutches at his throat. Then he wakes up. It was all a dream!

Or was it? The futuristic world Douglas Quaid (Arnold Schwarzenegger) and his wife Lori (Sharon Stone) inhabit has a service called “Rekall”  where people can go to get memories of vacations planted in their minds. Quaid asks for the personality and circumstances of his recurring dreams, including to meet the woman he sees there. But the procedure malfunctions, apparently because Quaid’s memory has been previously wiped and rewritten. He escapes by killing four attackers, then, returning home with bloody hands, discovers his wife is an actor when she tries to kill him.

Quaid travels to Mars where the fantasies he voices at Rekall are all true. The setting, the girlfriend, the government conspiracy…but is he recovering his lost memories, or is he still at Rekall in his virtual reality?

We never find out what is real and what is not. What could be a lightweight science fiction thriller instead makes you question the reliability of memory and the perception of reality. Is Quaid really a secret agent uncovering the evil schemes of the government, or is he trapped in a paranoid delusion and destined to be lobotomised, as others before him have been?

As well as the existential crisis you are treated to the finest special effects of 1990. There are robot taxi drivers, a futuristic manicure, holograph tennis practise, and the famous three-breasted woman who elicits one of the most infamous lines in cinema: “Baby, you make me wish I had three hands!”