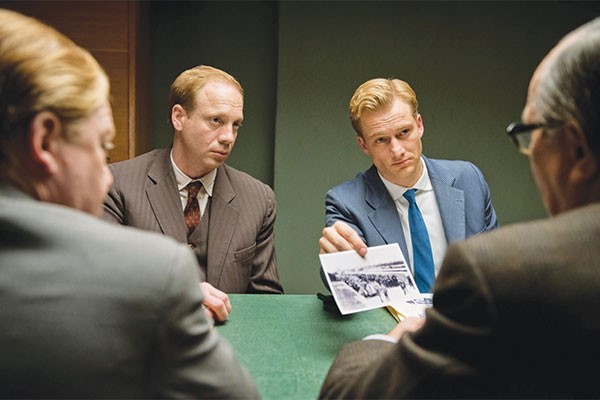 “I want these lies, and this silence to end.” A succinct summary of the driving motivation behind an issue almost too big for this two hour film. I say “almost” with admiration and respect for director Giulio Ricciarelli, who manages to imbue this German historical thriller with a mysterious blend of fiction and fact to enthrall viewers.

Labyrinth of Lies is an historical drama set 15 years following the end of WWII. Young public prosecutor, Johann Radmann (Alexander Fehling) seeks the prosecution of Auschwitz commander, Charles Schulz, who has taken up a teaching position, going against German law. Upon confronting respective authorities, Radmann discovers a wealth of former Nazis within the government, frustrating his attempts at prosecution. Upon being ordered by prosecutor-general Fritz Bauer (Gert Voss) to investigate former Auschwitz workers, Radmann is forced to interrupt a nationwide period of silence, amnesia, and blissful ignorance, potentially biting off more than he (and the film alike) can chew.

The massive thematic considerations the film are dealt with as ideas are thoughtfully pulled out, looked at, and placed into the narrative’s bigger picture. I did not feel like any questions asked were left completely hanging. If the film were longer, perhaps the emotional or personal effects on the characters could have been forefronted more. Fehling portrayed a headstrong, truth-above-all-else character wonderfully, but it did remove any opportunity to directly address the recent horrors of a nation and its identity personally.

However, the film itself is pieced together with wonderful and thrilling pacing. Despite the “historical drama” label, the way things are strewn together into a tangled roadmap of trust or betrayal could easily give the film the additional label of “thriller.” Labyrinth of Lies is an engaging piece of film that brings up an incredibly intriguing topic and turns it into entertaining food for thought. While it lacks is personal and emotional investment, it makes up for in its opening up of a perspective on WWII otherwise not seen—one that should be seen, too.