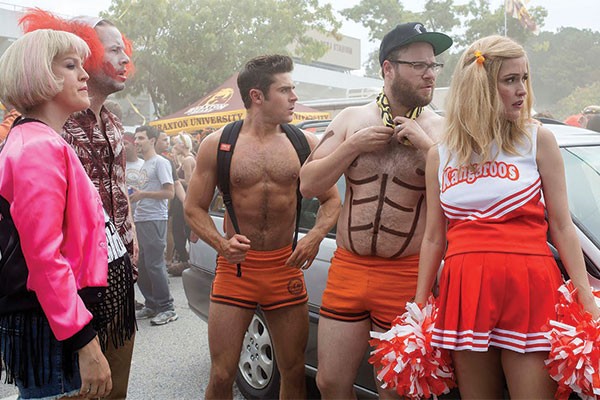 Let’s call this a progressive comedy for a modern age. Neighbors 2, In the spirit of the first film, opens with tubby wubby Mac (Seth Rogen) and his wife Kelly (Rose Byrne) attempting sex as exhausted parents.

The film begins gross, gets grosser, and ends kinda gorgeously. Mac and Kelly Radner are back, once again stressed over their quest to grow up and their questionable parenting ethics.

After finally selling their house and buying a new one, they find themselves in a hell of a pickle when they realise their previous house is under a grown up term ‘escrow’. The buyer has 30 days to pull out. Surprise surprise, a group of college girls fed up with America’s creepy and I quote “rape-y” sorority and frat rules move into the house next door that once belonged to Delta Psi. With the help of Zac Efron on both sides, the family of Rogen must fight to rid their neighborhood of Chloe Grace Moretz and her posse, while the sorority of Kappa Nu must fight the oppressive rules of college campuses who say Sororities are not allowed to party, only Frats can.

This film was crack up. It had some dark undertones (the college campus culture of America is represented as pervy, stupid, and sexist), was hilariously disturbing at times, and overall heart warming. Efron is an ultimate babe, Dave Franco is an angel and as much as she annoys me for her squinty eyes and grazing voice, Grace Moretz did pretty darn well as a Kappa Queen.

The lack of regard the young people had for the family troubled me ... do they have no hearts when they see there is a baby and pregnant woman involved in such sabotage??! Other than that, it was dick jokes and the same basic plot as its predecessor.

Overall, a funny film, reflective (American college systems are fucked up) and loving. It made me want to call my parents straight after.