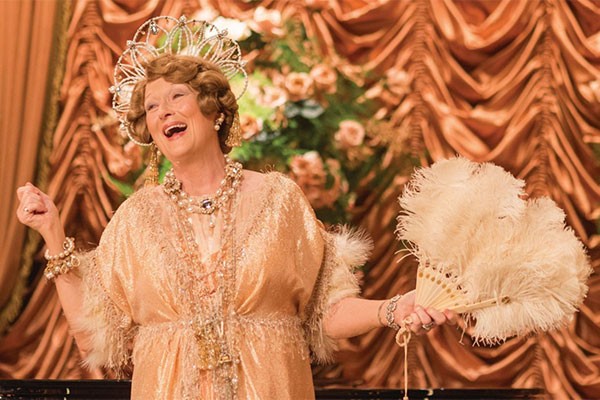 In the middle of a very stressful week, and nearing the end of a pretty hectic semester, seeing a heart-warming film about a rich woman who couldn’t sing turned out to be exactly what I needed.

Florence Foster Jenkins creatively depicts the life of Madam Florence (played by an again magnificent Meryl Streep), an eccentric and joyful woman who, with the help of her caring husband (Hugh Grant) and talented pianist (The Big Bang Theory’s Simon Helbeg), manages to fulfil a childhood dream and sing in a jam-packed Carnegie Hall. The film is wonderfully subtle and explores some fairly complex ideas primarily through its three acting leads. Streep is perfect, combining some truly comic scenes of her singing (and being generally delusional about her own vocal abilities) with the depiction of a woman who has a genuine love for music and art. Grant plays the surprisingly complex character of Florence’s husband, and delivers on multiple levels. Alongside them, Helbeg more than holds his own as the initially giggly pianist, who develops a true appreciation for Florence and her many flaws.

Director Stephen Frears does a fantastic job immersing the audience into the 1940s New York aesthetic, and while majority of the film is set indoors, the glimpses onto the streets allow for wonderful shots of people, vehicles and buildings that really reinforce the historical setting.

While the cynics in the film (and perhaps outside of it also) label Madam Florence as a deluded and self-indulgent madwoman, as the viewer you find yourself sympathising and even rooting for her success. The film does a great job of balancing both the comedy and drama, without focussing too heavily on either. And while I’m sure no one’s really in the mood for lofty discussions about dreams, love, and pride this close to exams, Florence Foster Jenkins would be perfect for some mid-week procrastination or even weekend escapism.