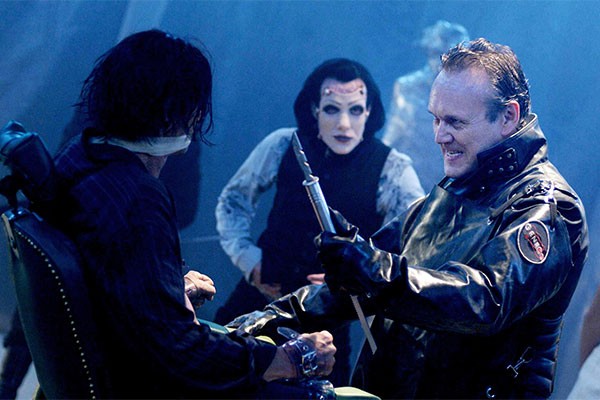 It’s the year 2056, and the future is super goth. An epidemic of organ failure has caused the deaths of many. A new company, GeneCo, offers organ transplants on a payment plan. Those who make their payments live on and live rich. However, those who miss their payments fall victim to gory organ repossessions by Geneco’s Repo men.

Comic book style panels explain the state of the world, and as the plot rolls forward, the comic strips return to give much needed exposition and backstory of the multiple characters. The thick, dramatic lines and minimal use of colour sets the tone well.

Shilo Wallace (Alexa Vega), a 17-year-old girl with a blood disease, is locked in her house by her loving but overprotective father, Nathan Wallace (Anthony Stewart Head). She frequently sneaks out to visit her mother’s grave. It is on one of these visits she encounters Rotti Largo (Paul Sorvino), the CEO of GeneCo. He tells her he wants her to be a star in his upcoming opera. Rotti Largo is dying and views his three children, Luigi (Bill Moseley) - an angry, violent psychopath, Pavi (Nivek Ogre) - a hedonistic fetishist who literally steals people’s faces to wear and Amber Sweet (Paris Hilton) - a surgery and drug addict, as unsuitable to take over his empire. Rotti is seeking an alternative heir. It becomes apparent that Rotti and Nathan have some history involving Shilo’s mother, many secrets are revealed and drama quickly ensues.

Technically this film is an opera, as the characters sing continuously. Most of the singing is on point, with impressive singers like Sarah Brightman, Anthony Stewart Head and Paul Sorvino involved. Almost all of the songs are great, although the song seventeen is the worst; not even a cameo from Joan Jett can save it.

The film’s narrator, Grave Robber, is played by Terrance Zdunich, the writer, lyricist and artist for the film, and damn, he can also sing. Repo! The Genetic Opera was born to be a cult classic and has gained a massive cult following since its 2008 release. This is an enjoyable, quirky film, and I would argue it’s right up there with the likes of The Rocky Horror Picture Show.