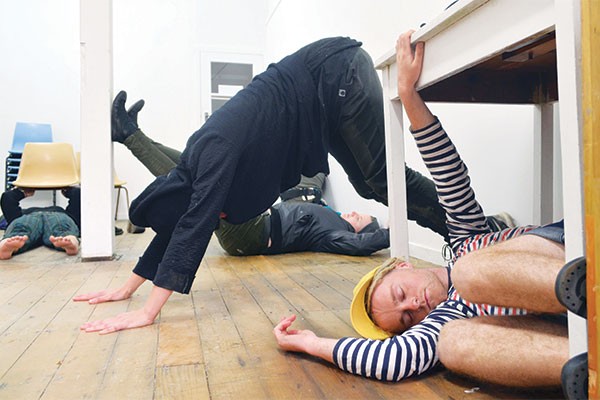 This Cloud Is Queering! Val Smith

“What if you had the agency to take your attention anywhere?” val smith  asks. We are in the small back-gallery space of Blue Oyster Gallery on Dowling Street. It is Saturday afternoon on the last day of April. By asking about agency, val is subtly directing our attention away from the traditional performer-spectator relationship, in which a designated audience watches a designated performer on a prescribed set-stage.

“What if the performance was the sound?” they  ask. The sound does seem to dominate the space. It is the sound of forced air: a fan, a vent – machine sound. “What if the performance was that wall?” The wall is a repurposed ceiling-as-wall: the plasterboard kind peppered with small regularly spaced holes. val continues to draw our attention to the wall by framing it as a performance. They lead us to touch it, to close our eyes and engage with the kinaesthetic experience of it. In such a way, over the course of this first hour we are encouraged to interact with the objects in our immediate vicinity.

Somatic is the term given to this type of interaction with objects, people, and space and it feels like the right term. This is the second workshop of val’s I have attended, and each time they have created a meditative environment in which traditional cognitive means of perception are suspended. Perhaps the word that comes closest to describing the experience is trance, but finding the right word is precisely beside the point for val. As a dance artist, choreographer and community organiser, val is interested in transforming momentary responses to space, people and objects into movement, not words.

Somatic experiences, improvisation and site-oriented projects are various methods val employs as part of their practice; one focused on the ways in which LGBTQI individuals and communities navigate heterosexualised space. As the 2016 Caroline Plummer fellow, val has been mapping queer and trans experiences of public space across Dunedin through one-on-one conversation-walks, discussions, classes and workshops.

In somatic experiences such as the one at Blue Oyster, val places emphasis on listening to space: attuning, sensing, waiting. In relation to the concept of queering space – or the politics of living safely and fully in heterosexualised space – val offers the idea of not marking the space (as queer), not impinging on it in any way. For to do so might involve a queer colonisation of space - and space (the earth), as we are only too aware, is colonised to the point of ecological collapse.  In a similar vein, panpsychist philosopher Freya Mathews frames existence as one “without the need for one party to impose itself on, or violate the conativity of, another.”

For the first three days of Diversity Week (16-18th May) val smith will be presenting an installation of gender inclusive composting toilets (Union Lawn). All welcome!