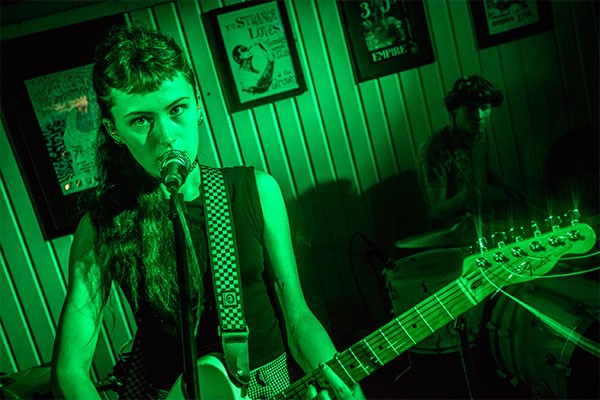 I had never felt so tired, so totally physically and emotionally spent, and yet I know that I will do it over and over again

When I was thirteen and watching the My Chemical Romance documentary for the sixtieth time I thought that touring with your band looked like the nicest possible time. What could be better than inescapable and prolonged bonding time with your close friends while working every night and sleeping very little? Now that I’m older (and more experienced) I see it more like Carrie Brownstein of Sleater-Kinney, as the experience that drives you to repeatedly punch yourself in the face in front of your tired and worried bandmates before you get on stage and play a show. I’m being overly dramatic, and I can’t say that I’ve ever been on tour long enough to actually try breaking my own nose, but travel with a band is a peculiar beast and it has its ups and its downs.

The first time Astro Children got out of Dunedin we were only eighteen. We played two shows, one in Christchurch and one in Dunedin. My lasting memories from that trip involve dragging all of our gear around Christchurch on foot hopelessly lost for over two hours, and a very stormy afternoon in Auckland where I had the period from hell and had suddenly realised that if I spent any more time in close proximity to other people I was absolutely going to lose my shit.

In subsequent years things have been better. I’ve learned a lot about managing and mitigating stress, I don’t look when airport staff manhandle my guitar, I always have tampons and bandaids, and I take full advantage of the times I can be by myself. The reality of traveling as a musician is that it is exhausting and often tedious. It costs a lot of money but you don’t ever make a lot of money so you never get to stay anywhere nice or go anywhere nice, you drink too much even when you don’t drink too much, you don’t sleep enough, and you’re always hanging around venues waiting. And, on top of that I usually spend half my time trying to get men in the music industry to respect me as much as they respect my bandmate, because once you leave the city where you’ve spent five years forcing men to acknowledge your work you have to start all over again. But if you only weigh up the negatives, which believe me I have, you end up wondering why you do it at all.

The tired, simple answer is that I do it because I love playing music. There’s nothing I like more than being on a stage and goading a crowd into responding, and when you play to new people they really respond. It’s exhilarating to get up in front of audiences. It forces me to push myself even harder than I would at home.

On our last tour we played six shows in ten days. By the end of the first show my hands were blistered, the skin on my left shoulder was rubbed raw from my guitar strap, I’d given myself a rock solid series of bruises on my inner thigh, and I’d taken all the skin off my fingertips. At our second show I had visions of my limp, unconscious body being dragged out of the venue into the parking lot as we battled through thirty degree heat in a tiny, airless venue with the windows shut and a sizeable crowd clustered around us. By the time we played our third show I was on self-imposed vocal rest and gargling salt water every hour desperately trying to get my voice back. I had never felt so tired, so totally physically and emotionally spent, and yet I know that I will do it over and over again.

Travelling in a band is a whole lot of lugging heavy and awkwardly shaped items, it’s a whole lot of interpersonal and personal tension and discomfort, and it’s guaranteed back and shoulder problems for life. But it’s also feeling invisible in a crowd until you’re pressed up against them grappling with your guitar and singing desperately into their smiling faces at an overcapacity house party, it’s talking a stranger through your pedal chain, and it’s sweaty, bloody, band high-fives across a destroyed drum kit. An Instagram post I made part way through our last tour encapsulates what travelling in a band means to me, “I’m still recovering from my own over-enthusiasm” I say, before enthusiastically plugging our next show.