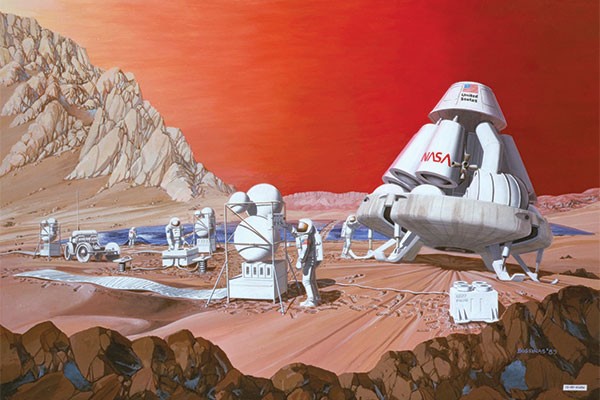 Why Do We Need...Mars One

Mars One is a not-for-profit venture led by Bas Lansdorp, with the goal of sending people on a one way mission to Mars to establish a human colony by 2024…or 2027ish. The final dates are yet to be determined.

A competition held in 2013 asked for volunteers to go on the one way mission, with over 200,000 reported applicants. In a 2015 Techspot article, one of the shortlisted applicants (who later withdrew) had deep concerns with the idea, calling the Mars One mission a scam. Dr Joseph Roche, who holds Ph.D.s in both physics and astrophysics, cites is the lack of psychometric and psychological testing as one area of concern, given the task asked. Further areas of concern raised in the piece is that the Mars One crew assembly was heading towards a Big Brother type reality show. Because that’s how I want to pick this generation’s explorers, by popular vote. Ph.D.s, worthless. Experience, irrelevant. But get the most votes—congratulations, you are the next Mars idol.

I mean what could go wrong…stranded with no way of getting home, you and your crew chosen by text against the unknown. Pick three other people you know. Someone you find attractive, someone you think is smart, and someone you would “socialise” with after a few drinks. Congratulations that’s your crew. Now all those things that annoy you now, the laugh, the pen tapping, the need to be right. That would magnify exponentially when you are alone on a planet with a mean temperature of -63 Celsius. There would be no escape.

A team from MIT reviewed the Mars One project and raised some interesting points. The stated goal of Mars One is to launch and maintain a self-sufficient colony using existing technology. Sydney Do et al confined their fascinating study to only crew related problems (environmental control, life support, resource allocation) and from their review of current technology, “[they] conclude that the Mars One mission plan is not feasible under the constraints that have been stated publicly and specified by Mars One”. For starters, the land mass needed to grow crops for a crew of four was 201m² (under ideal conditions), not the 50m², which Mars One claims would be able to sustain three crews. Further compounding this problem is the energy requirements for crops is 11 times greater than using rations, an unsustainable practice as more crews join the colony. The total cost is not the three billion per mission Mars One made up, but as each new mission is launched every 26 months, the cost potentially climbs to 16 billion by the 10th mission, dependant on which food source is used.

Do et al validate concerns that make Mars One science fiction. If we could legitimately get off world, and I was tapped on the shoulder to go, I would say yes. Stargate SG-1 and Atlantis can take some of the blame for me wanting to travel through space. Even when the suck factor was high, and at times it really would be, the very fact that I would be out beyond the farthest humankind has gone would be immeasurable. Everything you looked at would be the first time a human has seen it from that perspective, ditto every experience you have. And that just applies for the journey, not putting actual boots on the ground. Imagine meeting Other Worldly Beings (I despise the word ‘alien’). There are no words. Awesome, fascinating, cool-they just do not cut it.

Ultimately the Mars One mission is reliant on no mistakes happening ever. Unlikely. Do et al’s analysis did not take into account other areas of concern like descent operations, radiation protection and communication systems which adds to the problem. I would love to go to another planet (and others would love to see me go), but that is not possible for now. To meet OWB’s, there are no words. I believe Mars One is a non-starter, and will never take off (pun intended). I would be very happy to be wrong.

TL;DR – Mars One is a scam. Will never take off.