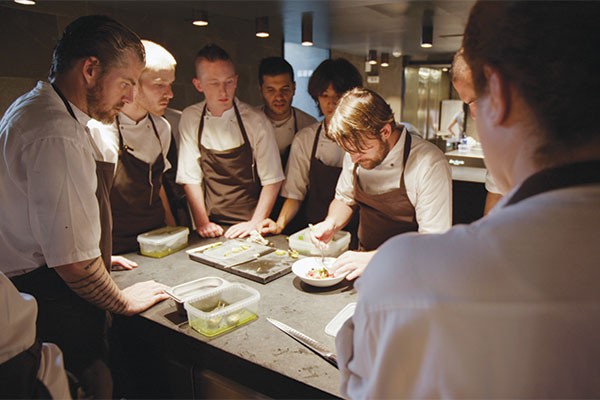 Noma: My Perfect Storm follows the rise, fall, and rise again of world class restaurant in Denmark, named Noma. Rene Redzepi, the founder and I guess we can say protagonist of the documentary, is a passionate, driven, creative, innovative, ingenious, charismatic chef who is driven by the idea of only using sustainable ingredients that are indigenous to Scandinavia.

I went into this film feeling pretty underwhelmed and not expecting much other than seeing some good food, which is always great, but I was totally flawed by Rene’s unwavering passion that was so incredibly infectious I left this film with a surge of pride for the creative industries as a whole and how lucky I am to be a part of it.

I now have a huge crush on Rene Redzepi, and follow all his social media accounts (he posts beautiful pictures of food, so you should definitely follow him too). There is also going to be a Noma Australia opening in Sydney, how rad is that?!

Despite Rene’s enthusiasm and the gorgeous shots of the prepared food, there were a few things that really let this film down; Some scenes felt melodramatic and forced. There is one particular part that sees the restaurant get slammed by media after an outbreak of norovirus. 63 people get the vomit inducing bug and the news spreads like wildfire. After this, there is a long-winded scene of Rene playing Squash (?) with some dramatic music and slow motion shots alluding to his frustration or something. But then everything is fine again when they win World’s Best Restaurant for the fourth time (thank God).

There are interviews with local farmers, gatherers and fishermen, but the lack of representation of women is pretty disappointing. His mother, who appears for about five minutes, and one female chef are the only figures in this aspect. Overall, a truly entertaining watch.