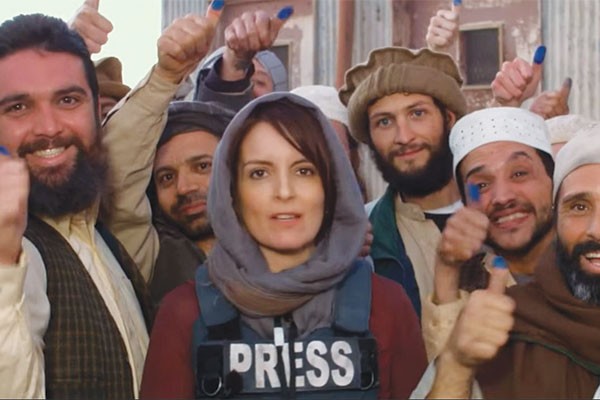 If your life was made into a movie which actor or actress would you want to play you?

Whiskey Tango Foxtrot, directed by Glenn Ficarra and John Requa, was originally inspired by the true story of Kim Barker and her biography ‘The Taliban shuffle: strange days in Afghanistan and Pakistan’.

We see a particularly hilarious encounter between Fey, the stereotypical “white American lady” and the very restrictive Islamic culture. Though women are marginalised in the Islamic culture, Baker is able to use her feminine perspective to produce new viewpoints on simple issues within a patriarchal society. As the film’s plot develops the audience watches Kim engage in dangerous and entertaining activities in order to get exciting news and content for the American viewers. After months of living in Kabul, Baker becomes obsessed with the high adrenaline job in Afghanistan, neglecting her life in New York, and immersing herself full throttle into the treacherous Islamic war life.

It is impossible for a person to go through this film without having a fangirl moment at one superstar or another (including famous Home and Away actor Steve Peacockeer). I loved the film for it’s humour: oftentimes the one liners of the characters would leave me in absolute hysterics. It provides the perfect balance of extensive comedy and drama. Fey is able to distinctively transition from a funny compelling individual into a serious dramatic character. Her character is a strong, ambitious and accomplished woman within a male dominated environment. If you want to experience a thrilling adventure that keeps you on your toes without you actually having to make any massive life changes, Whiskey Tango Foxtrot will definitely do the job.