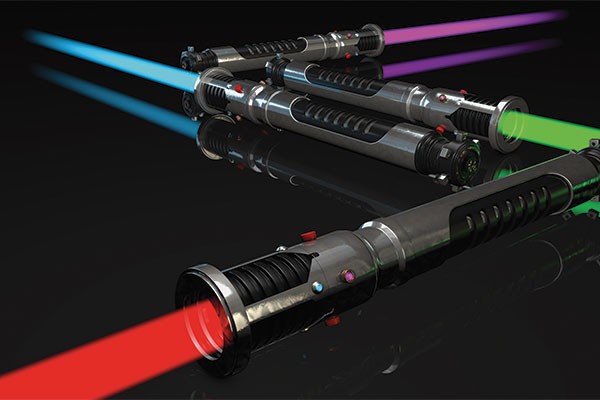 Described by the revered Jedi Master Obi Wan Kenobi as an elegant weapon for a more civilised age, the lightsaber is a blade of energy which can deflect blaster bolts, cut through steel and sever the odd limb or two. Fandom website Dorkly ranked the lightsaber as the coolest fictional weapon in a poll which also included Wolverine’s claws (seventh) and Dr Who’s Sonic Screwdriver (14th). As awesome as it would be to own one, the real world applications of such a weapon would be limited.

The lightsaber is an extension of the Jedi’s command of the Force. In much the same way as a wizard’s wand, or Kim Kardashian’s cellphone, the lightsaber amplifies the Jedi’s capabilities. Without knowledge of the Force (an unseen energy field which connects all living things), the lightsaber is nothing more than a dangerous glow stick. As a practical weapon, the lightsaber requires a lot of skill to use. If we were able to purchase one today, the emergency departments of every hospital in the world would be full of people with burns, missing appendages and cauterised gaping holes. Both Jedi and Sith warriors were able to use the Force to avoid danger by leaping vast distances, deflect shrapnel and move objects. The average person, armed with a lightsaber but having no command of the Force would succumb to injury if they were shot at by a rifle or had a hand grenade thrown in their proximity.

Assuming we could build one, a lightsaber requires a power source with high output to low expenditure. Particle physicist Don Lincoln noted in a Space.com article that a standard lightsaber power supply potentially produced 20 megawatts of high energy, and yet the wielders hands were not burned by the extreme heat emitted from the blade. In the real world, Lasers and plasma are cited as the two main possible vehicles to make this dream a reality.

Lasers are a small beam of focussed light. Using lasers, MiT Professor Vladin Vuletic has managed to merge two light photons together in the lab to make a molecule, which he notes has potential to mimic how lightsabers do not pass through each other. The second hypothetical solution is plasma, an ionised gas which has a high gas temperature but low heat temperature. Plasma is being used for welding and the electricity available determines the temperature. Both options draw on a huge power supply for low yield, not to mention that neither presented account for the problem of containing the blade length or the blade’s energy field.

Of course, anyone armed with a lightsaber would have to be familiar with some form of fighting. The Jedi have developed seven forms of lightsaber combat, but like any situation where policy and perspective changing weapons are put into play, the non-usage of the lightsaber or Form Zero would be the best option. I like Form VI (Niman), a style that was aimed at the Jedi who spent their days thinking and studying, a less aggressive form which allows for improvisation depending on the situation. With no real advantages or disadvantages in a one on one fight, it was proven to be impractical for the open battlefield.

To use a lightsaber effectively requires an understanding of the Force. But given that the Force is fictional, the question that should be asked before building any weapons system is, “at what cost?”.

Given that this week is International Star Wars Day (May 4th), I suggest you watch Cartoon Network’s The Clone Wars. A solid series full of violence, deception, political skulduggery and humorous quips. For a potential mind altering perspective on The Phantom Menace, Reddit user Lumpawarroo has presented a detailed argument on the true nature of Jar Jar Binks.

TL;DR – Lightsabers are cool, but without an ability to use the Force, they are deadly glow sticks. Would still buy one.