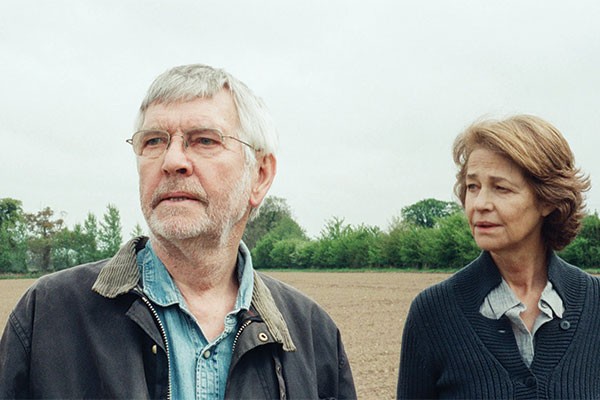 Kate and Geoff Mercer are about to celebrate their 45th wedding anniversary. A few days prior to the party, Geoff receives a letter. The body of his former girlfriend, Katya, has been found in the Swiss Alps - perfectly preserved in the ice, into which she fell 50 years ago. (Possible metaphor here for how early romances are always perfectly “frozen” in time, while the ones with longevity have to deal with compromises, familiarity etc.?) At this point, I can already see that this will be a little darker than what you’d expect from a quiet drama about a retired couple in the English countryside.

Geoff and Kate are both more shaken up by this news than they let on at first. Geoff hasn’t spoken much about Katya before, but Kate begins to suspect that the two had been closer than she initially realized. The film features many shots of paths - not just literal dirt paths, but also roads, rivers etc. - a visual reminder of the paths people take in life, which they may then reflect on and wonder what else might have been.

Kate is established as a friendly character in the earlier scenes - but as jealousy and fear gradually take hold, actress Charlotte Rampling conveys these subtle changes in a convincing way. Additionally, there are moments where the interpretation of an entire scene depends on how you read her facial expression and she manages to keep it just ambiguous enough so that different interpretations are possible. Tom Courtenay’s performance as Geoff is not to be overlooked either. Geoff mostly comes across as unassuming and well-meaning, but he is losing his marbles a bit and tends to speak his mind without being particularly tactful. Occasionally we are unsure if he is being deliberately callous or not.

The film’s cinematography must be given a special mention. The English countryside, which one would expect to provide a peaceful backdrop, is made to look ominous as hell: usually shrouded in mist, with black silhouettes of trees, frequent howling wind in the background, and the careful, deliberate framing of each shot, as well the effective use of music, make 45 Years all the more absorbing.