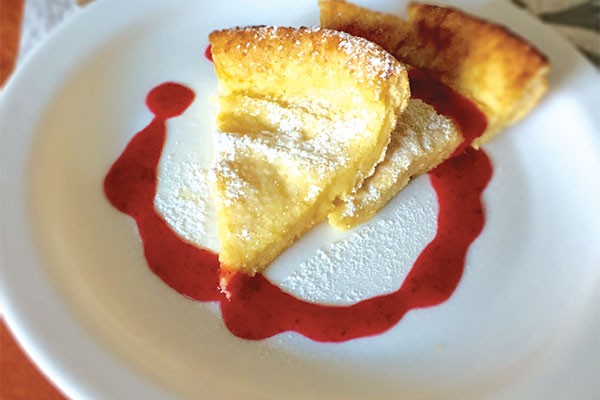 It all started with an episode of Bob’s Burgers. They stop at a diner and rave over these pancakes called Dutch Babies.

My BF is Dutch so I asked him what they’re like  and he has no idea. The next morning, I’m stalking Chrissy Teigen on insta and I find a post from two days ago of a Dutch Baby from her recipe book which apparently people are going crazy for. I’m surprised I had never heard of this form of pancake before since making meals from flat breads is my life (I make crepes for a living). So I take this as a sign from the culinary Gods that it is something I must try.

The result was an eggy cake that puffed up - kinda like Yorkshire pudding. Apparently the thing to have with it is lemons and maple syrup, with a thick dust of icing sugar. Didn’t have lemons or syrup so I put icing sugar and some homemade cranberry sauce on mine for something tart. The cake itself is quite bland, it’s the toppings that really make it yum.

Did a wiki search and turns out it’s not even Dutch, it originates from America. Instead of cooking it on the stovetop like normal pancakes, you actually bake it in the oven. Which was so quick and easy! If you don’t have an oven proof pan like an iron skillet, a cake tin or spreading the batter out on a muffin tray should do the trick.