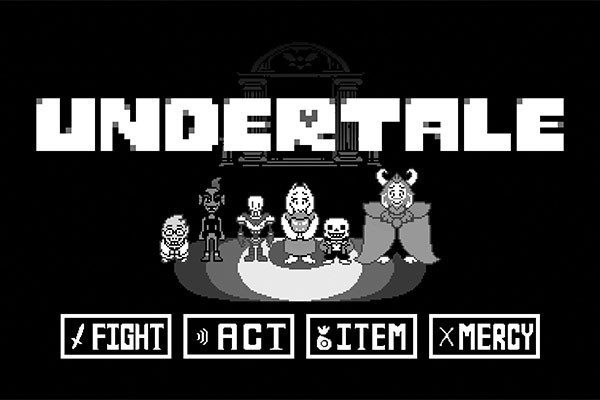 PC | Developed and Published by tobyfox

Within gaming circles, there is an ongoing debate about what it is that makes games important and unique among other forms of media. With reference to gameplay, these arguments usually focus on the dissonance between a game’s ludic elements (the ‘game’ part of the game) and the implementation of the game’s story. Undertale provides a giant smack in the face to this false dichotomy. It is a satisfying marriage of both gameplay and story, and has given me a very special gaming experience that I will never forget.

You play as a “human” fallen into the Underground, a place heavily populated by very unique and quirky monsters. Your objective is to escape the Underground and return back home to the surface. At face value, Undertale is fun and goofy – but don’t let the initial puns and somewhat ugly graphics fool you. Every action you make is irrevocably tied to your fate in the end. The tag line for Undertale is “the role-playing game where no one has to get hurt”, and although it follows moderately traditional RPG rules, every exchange you have with a monster is entirely unique and connected to the monster’s character. If you stay determined and survive the very challenging half-bullet-hell-half-turn-based combat, you are rewarded with a piece of dialogue that teaches you something about your enemies as characters. This is satisfying in itself, due to the humour of the fantastic writing.

The gameplay and narrative are so perfectly intertwined in the battle segments. Undertale plays with expectations of traditional RPGs, only to have you laugh, groan in frustration or learn from your mistakes through its metafictional self-aware dialogue. So many aspects of the story are scarily relatable to real life.

Player choice is a huge part of the journey, and every action you take changes the outcome of your ending. I initially completed Undertale with what is known as a “pacifist run”: I did not kill anything and performed acts of kindness at every opportunity. This is just one of the routes one can take to finish the story, and it left me alternately sobbing uncontrollably, laughing out loud and exclaiming “THIS GAME!!” more often than should be possible. The self-deprecating humour of the game is reminiscent of what encapsulates the internet culture that we are all too familiar with. Alternatively, if you aren’t the emotional type like me, you can take what is known as the genocide run and kill everyone you meet, turning Undertale into a pretty terrifying horror game.

Undertale places a lot of emphasis on both its overarching story and its many NPCs, whom you can either befriend or kill. However, what Undertale really nails is exploration and rewarding player curiosity. There are unexpected turns and events throughout every inch of the Underground world. Nothing is consistent. You really need to be ready for anything - and I mean anything. Date a skeleton, talk abut anime with a scientist lizard, have a cooking lesson with a fish warrior, flirt with a ghost or buy desserts from a spider bake sale.

The soundtrack – aptly described by Fox as “literally just mp3 files lol” – is beautifully composed, with a variety of acoustic guitar melodies, epic Final-Fantasy-style chimes, piano themes that drive home a feeling of dread, and nostalgic throwbacks to retro NES games. For me, each song triggers a memory of a particular encounter, area and emotion felt when immersed in the game. Tracks as simple and short as “Memory” or “Home” are enough to make me emotional.

Undertale is an inspiration for anyone feeling like they can’t pursue a creative endeavour. Created in Game Maker, with music composed in FL Studio, sprite character design and a sometimes-ugly art style, Undertale is doing everything that huge Triple A studios wish they could pull off or even have the guts to try. Effortlessly funny and charming, while simultaneously heart wrenching and beautiful, and for a price of only $12, Undertale is a triumph in the creative vision of what games can be.