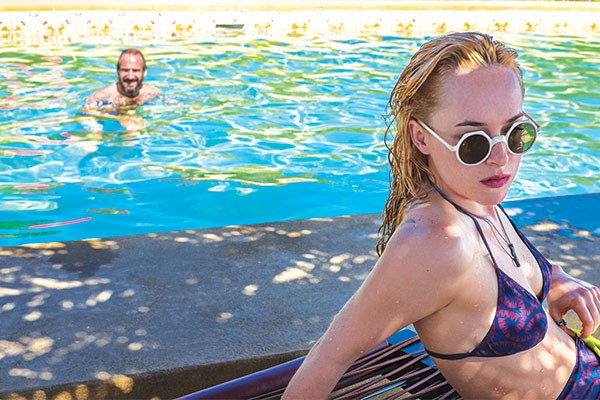 Imagine if Spring Breakers was directed by Woody Allen. This movie is a bit like that, but sadly isn’t as interesting as the description makes it sound.

Tilda Swinton plays Marianne Lane, a Bowie-esque rock star who is vacationing on an idyllic Italian island, with her boyfriend Paul (Matthias Schoenaerts). The couple is visited by their old friend Harry Hawkes (Ralph Fiennes), a boisterous record producer, and his 22-year-old daughter Penelope (Dakota Johnson). Harry is still enjoying a hedonistic rock ’n’ roll lifestyle and seems keen to draw Lane back into it, while Lane is happily settling into middle age and enjoying monogamy. During the movie, each of the four leads becomes romantically entangled with all of the others (I’m exaggerating but not by much), and much fornication ensues.

The movie boasts a very committed performance from Ralph Fiennes. As we’ve already seen from The Grand Budapest Hotel, Fiennes is a versatile actor who is branching far out from his usual Oxbridge-type roles. In particular, his character has a manic dancing scene that is one of the most memorable sections of the movie. Tilda Swinton is obviously a great actor - her character is recovering from a throat operation and rarely speaks, and she manages to communicate a lot without words. Johnson has an engaging screen presence, though her two-note bratty-and-seductive character doesn’t really give her much to work with. And Schoenaerts doesn’t really have any character to work with at all.