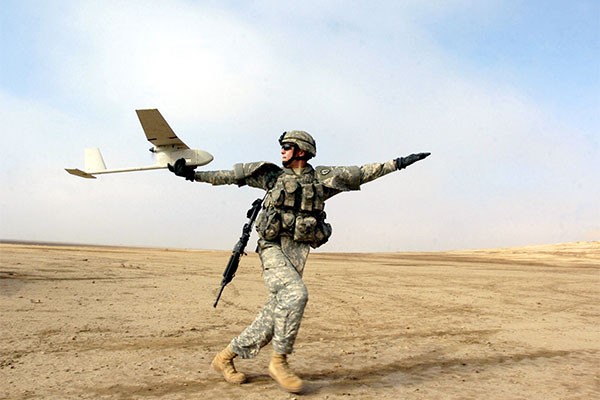 Circling 30,000 feet above a desolate village in Afghanistan (or Yemen, Somalia or Pakistan) is the latest chariot of fire, harbinger of death and destruction ready to launch Hellfire upon the plain. With politically disarming names like Shadow, Global Hawk and Rainbow, they can lurk for at least 30 hours on site as symbols of democracy and liberty (sic).

To bastardize Fred Dagg aka John Clarke’s Gumboot Song, “If it weren’t for UAV’s, where would IR classes be? Still talking about MAD and bogus WMD’s.” Unmanned aerial vehicles (commonly referred as drones) are arguably the scariest thing on the battle field. That honour previously belonged to the sniper, an unseen foe that with a high degree of skill could end your life. While the sniper could extinguish you from up to 2400 metres away, they were still in the same vicinity as you. Now death by UAV can come from a button pressed in a shipping container in Nevada, 11,830 kilometres away.

UAVs are not tiny little textbook sized things but fully formed aircraft equipped with both infrared and normal cameras and those shiny things called missiles. Let’s not forget them. The people living underneath them certainly do not. A joint Stanford-NYU study explored the impact of UAV strikes in Pakistan. They cited The Bureau of Investigative Journalism who claimed that between June 2004 and September 2012, 20-25 percent of the total deaths from UAV strikes were civilians. I personally believe that statistic is low, as it would not take much effort to classify the deaths of military aged men (18-64) as combatants, despite them not being armed.

Those living under the threat of attack from UAV have been known to suffer from anxiety, hyper startled reactions, anger, loss of appetite, and PTSD. Many civilians interviewed commented that when they are sitting in a group they worried that an attack could be imminent. One is quoted in saying, “Even though you cannot see them [UAV’s], you can hear them, you know they are there.”  Another said “…[that] when the drone is moving, people cannot sleep properly, or cant rest properly. They are always scared of the drones.” And we get upset if there is no wifi.

So why do we need UAVs? There is the freedom from unnecessary loss of (friendly) life. Citizens do not like seeing their dead on the evening news, so politicians are reluctant to commit troops, despite the fact that is what they signed up for. There is a level of expectation that you will end up seeing action. UAVs provide a chance to fight wars by proxy, to limit the boots on the ground to the barest minimum and still fulfil the task.

Cost is also a factor in deciding to deploy UAVs. An article published by The Conversation website claims that the cost per hour of a Reaper UAV is $3250 USD, compared to the latest fighter plane, the F35 JSF which costs $16,5000 USD per hour. Not to mention the cost against those soldiers deployed. The article goes further and cited additional costs such as traumatic brain injuries, the advances in medical science for loss of limbs, and the unseen trauma of mental health injuries. Less people means less social problems, and is cheaper in the long run.

But there is still a cost. From the civilians living under the threat that their next meal could be their last, to those UAV operators who commute to work, kill for eight hours a day, and then go home and see their work on the evening news. There is no down time, no chance to decompress. UAVs have changed the flavour of war, but the taste is still bitter.

TL;DR – UAVs lead to loss prevention of military lives, but in turn has caused entire civilian populations to live in fear.