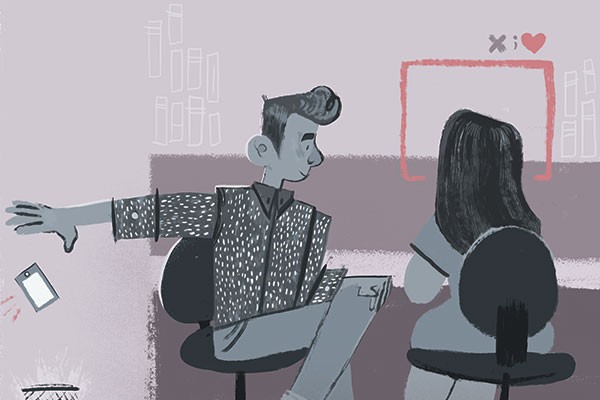 Anthony Marris reveiws tech ideas, gadgets, and websites to tell you how they will help or hinder your life

Public opinion on Tinder is varied. A straw poll I conducted had mixed results. Some loved it, some thought it was weird. Others claimed that they “did not use it much, [and] only used it to chat”. My only foray into Tinder (using my brother’s account) was to field test what I considered the perfect pick-up line. The results were less than satisfactory, the project abandoned.

Tinder claim they have 9 billion matches. But, like life, nothing is perfect. A quick peruse of Youtube reveals hours of people discussing bad Tinder dates. To their credit, Tinder has a page offering basic security advice. Arguably the information provided is common sense, such as tell someone where you are going, who you are meeting, meet in public, and keep your financial information to yourself.

To start on the journey of potential match making, the process is pretty simple. You download the app, logon to Tinder using your Facebook account, wait while the app cross matches your first name and age, and borrows photos from Facebook to let people know what you look like. Fill in your preferences (age range, gender, proximity to you) and then you start matching with people. Swipe right if you like them, swipe left if you don’t. If you match up with a person, then you can engage in such witty conversations like “DTF”, or “You wanna screw?”

What potential downfalls could there be? The minimum age to join is freakin’ 13 (check their terms of service). While Facebook verification does aid in limiting underage contact, it is not unheard of people to falsify their details or create a second account to avoid prying (parental) eyes.

Is it true Tinder is causing rates of STIs to rise? The most recent and comprehensive study (2014) was done by the Centre for Disease Control in the US. Their findings showed a 15.1% increase in syphilis nationally, but they could not link the rise in STIs to use of Tinder. There is only one study that links a dating app to an increase in STIs. This study was ad hoc, and it linked Grindr (an app aimed at gay men) to a rise in syphilis in Christchurch during 2012.

My biggest concern is stalking. There was a flaw in the app’s security where geolocating data could be obtained but when Tinder were notified of this issue, they patched it. You go on a Tinder date, it doesn’t go well, and you go your separate ways. But the other party decides they can make you change your mind. Famous stalkers masquerading as romantics include Noah (Notebook) and Edward (Twilight). Because if they are “hot” they are percieved as being romantic, not creepy – or so the myth is.

The amount of potential information revealed in casual conversation could be staggering. Aside from the usual (favourite books, movies, name of pet), the photos you use can also reveal more than you thought. That picture of you in your leaver’s hoodie. Well it doesn’t take much to figure out the school, then trace you through Facebook. But of course no one stalks people on Facebook…no, never.

There is no real evidence that shows apps like Tinder are any better or worse than being picked up in a bar. You might go home with the person, contract an STI (or not), be stalked (or not), be friends for life, or be the mistake that is mentioned in hushed tones. Oh, and as for my so called perfect pick-up line…If you could go anywhere back in time, knowing that any actions you did would not change the present, where would you go and why?

TL;DR – Tinder streamlines the dating process. Use it or don’t. But practice safe sex.