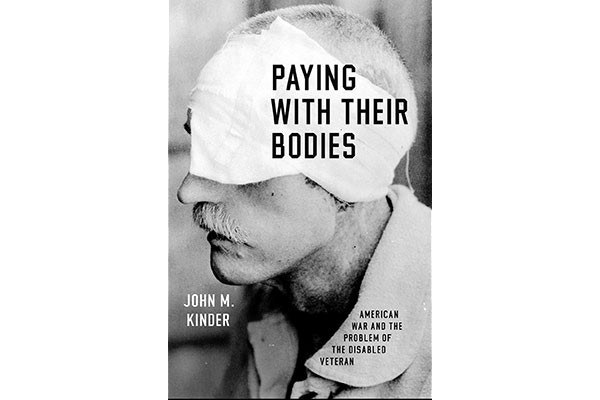 Paying with their Bodies: American War and the Problem of the Disabled Veteran

Paying with their Bodies: American War and the Problem of the Disabled Veteran, by John M Kinder, takes on the subject of disabilities caused by warfare and the treatment of disabled veterans throughout American history. Kinder begins with the treatment of disabled war veterans and chiefly focuses on the aftermath of World War One. He examines the soldiers’ rehabilitation movement that followed the First World War, the organisations that lobbied on disabled veterans’ behalf and the rhetoric of peace activists using the disabled body as an anti-war symbol. Kinder ends with an overview of the problem of the disabled soldier from World War Two to the present day.

One of the many repeating patterns Kinder observes is the terrible conditions in veterans’ hospitals. In the aftermath of World War One, “[h]ospitalised vets testified about endless red tape, indifferent staff, supply shortages, and inadequate medical care.”

Of a Vietnam veterans’ hospital, he writes: “Water dripped from holes in the walls, and the entire hospital reeked of garbage and human waste. Crammed into filthy wards, spinal injury patients waited hours for even the most rudimentary care, their untended urine bags leaking onto the floor.”

A 2007 investigation into the conditions at Walter Reed Medical Center, the nation’s premier treatment facility for disabled combatants, “found disabled Iraq veterans living in squalid, cockroach-infested rooms, where black mould dotted the walls and mouse faeces stained the floors … many patients described a general attitude of indifference among hospital staff.” By these parallels, Kinder proves that his focus on World War One does not limit the scope of his discussion.

Since the First World War, revelations of the disgraceful conditions in hospitals for disabled veterans have scandalised the American public. But none of these scandals has ever resulted in a long-term solution to prevent the same thing happening again. The same is true of nearly all the issues Kinder raises. Although he does point out how various attitudes have changed, Kinder makes it clear that the ultimate negligence has not, and that, despite technological advances, disabled veterans will exist for as long as war does. Kinder concludes Paying with their Bodies by offering a solution he calls “a New Veteranology”, an ideology revolving chiefly around open communication about war and disability. Ending on this optimistic note makes Kinder’s work more than a fascinating if gloomy piece of history; he presents a serious problem and offers a thoughtful solution.