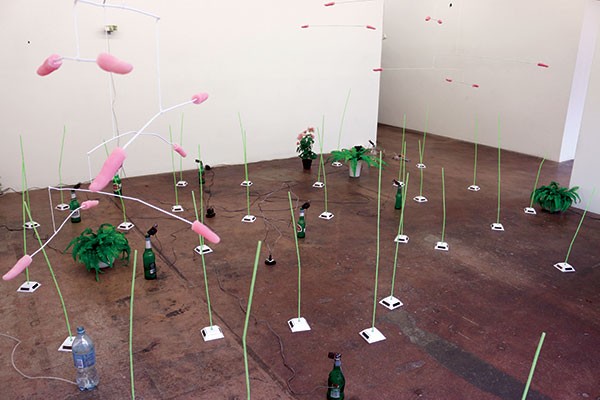 "It’s an experimental space,” curator Chloe Geoghegan remarked on my arrival to the Blue Oyster’s most recently installed exhibition, Grey Goo. It certainly did feel that way as I stood there, an ominous hum playing around me and a McDonald’s burger shaking vigorously at my feet. Grey Goo is a collection of works by Tully Arnot, originally from Sydney. The show represents a large body of his most recent pieces.

“Experimentation” is the overwhelming first impression of both the exhibit as an art space and the aesthetics of the works themselves. A mess of wires is strewn across the floor, connecting various and seemingly inanimate, non-programmable objects, including houseplants, beer bottles, severed fingers and toes and the aforementioned burger. Almost like a project from a primary school science fair, in which children are encouraged to hook up wires and cords to whatever they can get their hands on, electricity and motors provide new life and purpose to these regular, unassuming items. Arnot’s works reminds one of the classic current-generating potatoes, only in this case the objects receive a current, which in turn produces new behaviour.

The various plants in the show appear inanimate, just as they would in any other indoor setting, a fact we often assume, even though they are organic and living things. Arnot has repurposed the plants using hidden motors and solar panels so that, when standing away from them, the aptly named Nervous Plants shake slightly as if they recognise your presence from a distance and cannot quite hold themselves together. However, they swiftly return to an inanimate state (perhaps out of shock!) upon being approached. Similarly, the burger that sits alone on the floor shakes uncontrollably. I took this excited motion as its desperate attempt for me to notice it and put it out of its uneaten misery.

The animatronic Lonely Sculpture presents itself as a finger that endlessly taps right on an iPhone running the Tinder app. While comical and somewhat absurd, it comments on the disengagement of personal experience and interaction through the internet, particularly through apps like Tinder. By efficiently streamlining the user’s online experience, it ends up taking that “experience” away altogether. This disconnect pushes further questions about the nature of objects and how we interact with them. Arnot is travelling to China to create a mass-produced, commercial version of this piece, following its social media success. This art object will soon enter into the everyday-object sphere.

The beer bottles are the most engaging piece, which is not at all surprising with their siren song filling the room. Based on an earlier work titled Bottle Song (2013), the original 100 bottles have been replaced with eight, but used to much the same effect. Small 12v fans blow periodically into their necks, in much the same way as you would stand around at a party and nervously blow during a lull in the conversation. Combined with the moving plants and vines, this makes the space feel like a rainforest, only one filled with the sound of fans and crawling animatronics.

Grey Goo subverts the idea of the readymade with its objects that become (enhanced) subjects of artistic function. What we at first perceive to be everyday items function in unexpected and unnatural ways, highlighting the object’s potential for interpretation, rather than simply existing as the object itself.