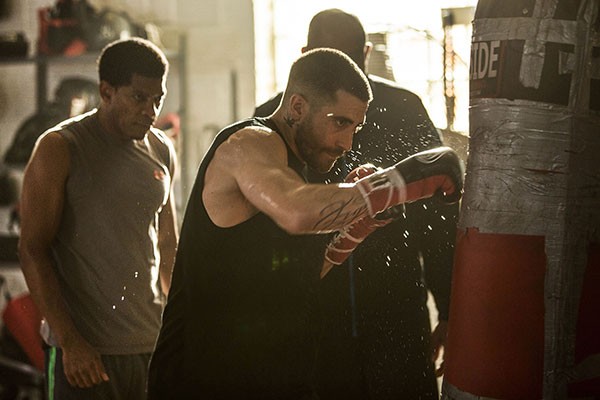 Despite the influx of Eastern European titans in recent years on the world stage, boxing in the United States remains a Black- and Latino-dominated sport, as it has been for decades.With the release of yet another fantasy about a white champ, it seems Rocky didn’t do enough to soothe our collective white insecurity.

Southpaw follows Billy Hope (Jake Gyllenhaal), a boxer at the peak of his career. While attending a charity event with his wife, Maureen (Rachel McAdams), Billy gets into a fight with rising boxer, Miguel “Magic” Escobar (Miguel Gomez). Maureen is accidentally killed by Miguel’s brother — unable to cope, our protagonist turns to alcohol and drugs. Subsequently, his daughter, Leila (Oona Laurence) is taken away from him by Child Protective Services. In the hope of getting his old life back, Billy dedicates himself to working his way back to the top with the help of veteran boxer Titus “Tick” Wills (Forest Whitaker).

Gyllenhaal and Whitaker both deliver excellent performances. Gyllenhaal’s development from an unsympathetic wreck with self-made problems to a character who more than earns his redemption is no less impressive than the actor’s actual dedication in preparing for the role. Although Whitaker hardly breaks new ground in the role of a tired, sad, cynical trainer looking for purpose, he plays it well. Some of the few laughs and more genuine moments in Southpaw come from his weary exasperation.

Unfortunately, Rachel McAdams’s character is rather two dimensional — appearing more as a foil for Gyllenhaal’s character to grow. Oona Laurence’s portrayal of Leila irritates the moviegoer. The child has three traits in the film — beaming worshipper of daddy, resentful glower-er, and hysterical — all are cringeworthy.

Although Southpaw has no surprises from start to finish, the cast’s solid acting and the polished cinematography save it from being a total dud.