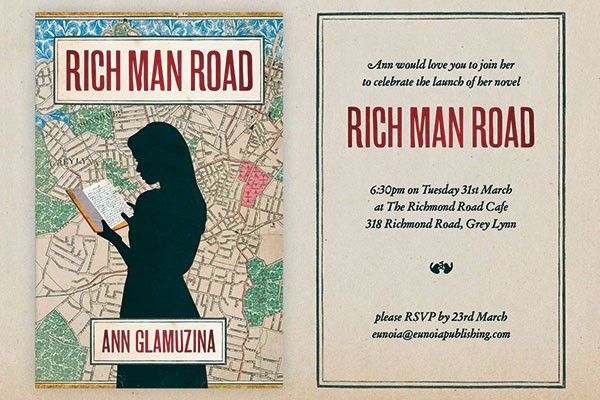 Rich Man Road,by Ann Glamuzina, tells the separate stories of two immigrants to New Zealand. One morning the novice nun, Pualele Sina Auva’a, awakes to find that her friend and fellow nun, the elderly Olga Mastrovic, has died in the night. She has left behind a letter to Pualele, confessing that Olga felt herself to be a fraud who was never meant to be a nun.

She asks Pualele to read her journal, hoping that Pualele will learn from her friend’s choices and work out what future she really wants before taking her vows.

The book that follows consists of chapters from Olga’s journal, each followed by a chapter about Pualele’s childhood in third-person present tense. Olga’s journal traces her long slow journey from a tiny village in Dalmatia, which her family had to flee during World War Two, to New Zealand. She blames herself for having caused the conflict between the villagers and the German soldiers occupying the village, which forced them to leave, and believes her mother blames her too. Pualele leaves Samoa for New Zealand in 1979, sent to stay with her aunt and uncle in Auckland as part of an illegal adoption. Her difficulties fitting in with New Zealand culture lead to humiliation and disaster, and her misery is increased by being conscious that her mother has given her away. At the point where Olga and Pualele’s lives intersect, the connection between them is apparent.

While Olga’s story begins in a dramatic situation, Pualele’s gets off to a slower start. The initially contrasting narratives switch between a girl who is imperilled by Nazis and unwisely risks her life and a girl who moves country and has to start a new school. Soon enough, however, the divide lessens as terrible things happen to Pualele. Each new chapter is so engaging that it ends with a wrench of disappointment  when you have to leave behind the girl you’re currently worried about to learn what’s happening to the other girl you’re worried about. Rich Man Road consists of drama bomb after drama bomb, with just enough hope and positivity intertwined for it all to seem plausible. Glamuzina writes with strength and clarity, and rarely wastes a sentence.

There is a huge time skip, which is a bit frustrating, especially for Pualele’s story. Olga’s story ends with her in the convent and we understand exactly why she’s there. Pualele’s narrative leaves her somewhere in her early teens, still homesick for Samoa, although beginning to find happiness in New Zealand. We rejoin her in the convent, where she has just finished reading Olga’s journal. At this point Pualele must be 42, but her character still comes across like a young adult. Both Pualele and Olga have used religion to retreat from the world, but it still seems like a long time for Pualele to have stayed in an unsure and insecure stasis. The ending hinges on her decision about whether to stay in the convent or return to Samoa.