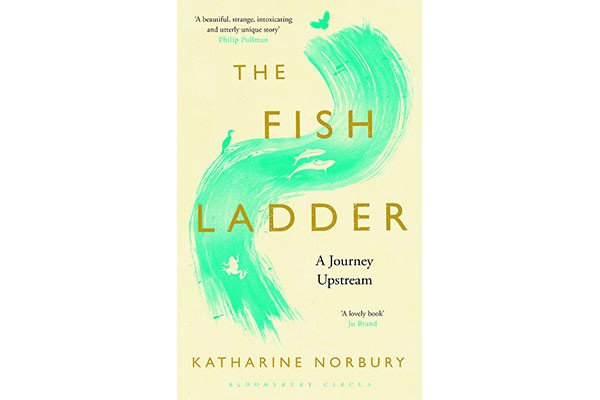 The Fish Ladder: A Journey Upstream

The Fish Ladder: A Journey Upstream is a memoir by Katherine Norbury. After miscarrying a much-desired pregnancy, Norbury distracts herself from her grief with the writing of a man named Neil Gunn. One of Gunn’s novels, The Highland River, tells the story of a young man walking a river to its source. Norbury finds that the river in the book is a real river, and resolves to make the same journey. The Fish Ladder tells the story of this journey, and many other journeys that Norbury takes, which are usually accompanied by her nine-year-old daughter, Evie. Norbury winds her experiences with breast cancer, mental illness and being an adopted child into this narrative.

Norbury also retells folk stories, quotes poetry and shares seemingly random anecdotes about her life — skipping backwards and forwards between different times and different settings. This results in a loose, meandering effect, but Norbury’s writing still sweeps the reader along until it seems like an intentional stylistic choice, an echo of the running water that this book is about. Norbury is the kind of person who constantly sees omens in animals and various meanings layered over life’s events. If you don’t care for humanity’s tendency to project patterns onto absolutely anything, Norbury might annoy you.

Norbury’s relationship with her daughter is the best part of the book. Evie is never dwelled on or over-described. She’s just there sometimes, as a very real person and a very real child, with her own priorities and her own insights. Most striking, however, is the sensation Norbury conveys of herself and her daughter being a team. Towards the end of the book, when Norbury is meeting a member of her birth family for the first time, Evie reassures and supports her mother. These are things children often do for their parents, and yet this is hardly ever shown in depictions of parent-child relationships. It’s lovely to read.

Part of Norbury’s book deals with her experiences of fertility treatment. Her doctor tells her that: “He had noticed that a disproportionately large number of people who were adopted, relative to the normal population, presented themselves for fertility treatment. In other words, either adoptees with impaired fertility had a greater desire to create a child of their own than non-adopted people in the same circumstance, or adopted people were proportionately more likely to encounter difficulties conceiving than the non-adopted population.” This is interesting, but seems to be based entirely on one man’s casual observation, and so he can hardly be sure those two given options are the only ones. Norbury treats this anecdote as true science and ties it in with her own experiences of adoption and alienation. It works for the memoir, but would seem less of a leap in logic if some reference were made to the doctor having actual data, not just nebulous noticing.

The Fish Ladder is Norbury’s first book, and it’s a good one. The range of subjects it touches on is a little overwhelming, but hopefully Norbury will keep writing and improving. The Fish Ladder is an excellent start.