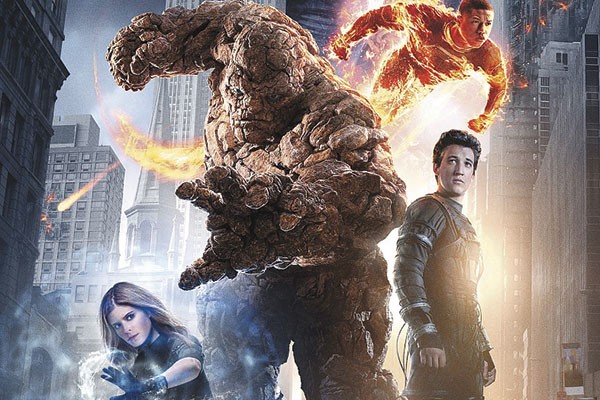 A t best, the 2005 version of Fantastic Four was average. The acting was poor, the storyline was mediocre, and the flexible guy really freaked me out. But with Miles Teller now playing Reeds Richards (the flexible one), I had hope for the revival of Fantastic Four. Teller is funny, cute and he has played a couple of roles in other films that I’ve quite enjoyed. Unfortunately, Teller couldn’t carry this particular film, especially one with the same sub-par acting, terrible storyline and plain bad jokes as its predecessor.

Reed Richards is a dorky kid who, with the help of his best friend, Ben Grimm (Jamie Bell), creates a teleportation device for his school science fair that teleports toy cars to another dimension and brings them back again. His device gains the attention of Dr. Franklin Storm (Reg E. Cathey), who offers Reed a full scholarship to work for him and assist in the creation of a teleportation device large enough to transport humans. Storm’s children, Sue Storm (Kate Mara) and Johnny Storm (Michael B. Jordan), along with Victor Von Doom (Toby Kebbell), work with Reed to build it.

Upon completion, the boys decide to use it before NASA can get their hands on it and Reed invites Ben to join as well. Victor screws up exponentially, and pisses off the volatile energy that the alternate dimension contains. Sue manually overrides the device to get the boys back to safety, minus Victor, who is consumed by the green energy. The resulting explosion as it re-enters Earth’s dimension gives each of the four, including Sue, special powers. A year later, the four of them have learned to harness their powers and reunite to destroy Victor, who did not die in the explosion and is now intent on destroying the Earth.

The fight that ensues is won by the good guys far too quickly — there were no nail-biting moments whatsoever. The individual introduction of the characters took far too long, and not enough time was spent on the actual development of their relationships. Despite the promise the Fantastic Four held, the film was a disappointing repeat of the 2005 version and, if possible, it was worse. Teller, you let me down.