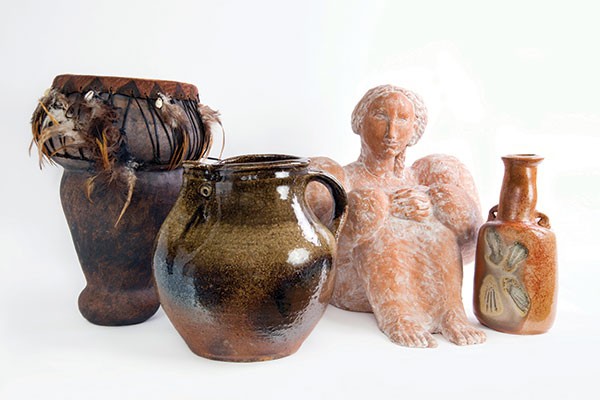 As one of New Zealand’s most significant twentieth-century artists, the late Dunedin painter, Ralph Hotere (1931–2013), had a life intrinsically shaped by the connections he made with people and through art. These relationships are the focus of Intersections: Ceramics from Ralph Hotere’s Personal Collection.

This special exhibition at the Otago Museum offers new insights into Hotere’s artistic interests, art collection, professional and personal relationships, his home, garden and studio. It features over 70 pieces, many by notable New Zealand ceramicists. Some pieces in his collection were by artists Hotere admired and spent time with, other pieces are work he bought, exchanged, or collected and retained for personal reasons. The stories of these pieces and the artists who made them are interwoven with stories of Hotere’s life.

The exhibition begins with a memorial post made and gifted by Barry Brickell on the death of Hotere’s father in 1982. It represents a totara fence post and features a poem about the annual return of the godwits from Alaska in eight days.  This post, along with a large coiled pot that split when Brickell fired it, has stood in Hotere’s garden for many years.

Brickell, a master of ceramics and close friend of Hotere, made most of the pieces in the collection. While his Driving Creek, Coromandel, studio was under construction in 1975, Brickell moved to Dunedin and Hotere provided him with a house and studio in Port Chalmers. Here he built a kiln, using waste pine bark from the wharf at Port Chalmers to fire it. The pots that Brickell made were exhibited at Dunedin’s Bosshard Gallery in 1977 along with works by Hotere and Michael Trumic. Echoing this early exhibition and further highlighting the connection between Brickell and Hotere, are two Hotere paintings, loaned by Brickell. These works are from Hotere’s Test Piece series, which was inspired by Brickell’s kiln firings. Hotere was influenced by Brickell firing pots, just as Brickell was influenced by Hotere’s incorporation of text in his paintings. Hotere was inspired enough to make ceramics on rare occasions — an example is the one plate on display from a set of six that he decorated in 1985.

While Hotere was widely known and respected as a painter, his friendships with New Zealand potters and his interest in their ceramics were less understood. Works by other New Zealand potters Nicholas Brandon, Lawrence Ewing, Mirek Smíšek, Ann Verdcourt, Michael Trumic and Chester Nealie, and Dunedin artist Adair Bruce are found in Hotere’s collection. Some of the artists had come to New Zealand to escape the aftermath of World War II in Europe. Hotere also felt personally affected by this reality as someone he viewed as a brother had been buried in a war grave in Italy.

The white domestic furniture positioned throughout the show illustrates how Hotere used his collection in his domestic domain. A black painted corrugated iron fence, which displays several large photographs of Hotere’s home, serves as a tribute to Hotere’s use of corrugated iron in his art works. There are also two drums by Adair Bruce: she gifted the taller drum to Hotere and he purchased the other. Bruce will be down in September to demonstrate the drums.

Whether they lasted a brief moment in time or over a longer period of collaboration and friendship, the intersections highlighted in this exhibitions reflect Ralph Hotere’s relationships with the people and art that surrounded him during his lifetime.